Do You Know the Difference Between A Swift and Swallow? >>REDIRECTED<<

After the dark months of Winter, there is an air of expectancy as we enter Spring. The arrival of Swifts and Swallows is often evocative of childhood. In the last 20 years, numbers have greatly declined, due to climate change, fewer insects or through the loss of suitable nesting sites. As we await their arrival, do you know the difference between a Swift and a Swallow?

Swifts may look black against the contrast of the sky, but their feathers are actually dark brown. The throat area is quite pale and you may see this if they are flying low. Swifts have long, narrow wings and the tail, although forked, is less defined than Swallow tail feathers.

Swifts have deep-set eyes with moveable bristles at the front. Think of these as sunglasses to protect them from the glare of the sun. Swifts are approximately 16-17cm in length and have a 42-48cm wingspan. They weigh 36-50g.

There is much confusion about the lifespan of a Swift. You might expect these birds to live for 8 or 9 years but records reveal some surprising facts. The oldest known Swift was ringed as a chick in Switzerland. It was recovered alive 21-years later. While this is remarkable, the estimation is that only 2% of the Swift population will reach this great age.

Swifts often nest in caves, hollow trees or ready-made nest holes left by other birds. They will also colonise city buildings. However, many of their traditional nesting sites including old barns or outbuildings no longer exist. They will search for other suitable accommodation. They build the nest with any materials gained in flight and use saliva to glue the nest.

They mature at 4-years old and have their first brood in late May.  They lay just one clutch with 2-4 eggs in each nest. The eggs hatch within a 3-week period and the young birds will fledge between 35-56 days.

Swifts are constantly on the wing apart from when breeding. Both adults will share the feeding duties and pair up for life. When they migrate to Africa, pairs separate and meet up at their usual nest site the following Spring.

Swifts are quite noisy. It is easy to distinguish their song from Swallows. They are wonderful to watch and swoop and turn in aerobatic displays. If you see a bird sitting on telegraph wires, it is not a Swift. They have tiny legs which make manoeuvering very difficult. Swifts are flight specialists living on small insects and spiders. They potentially eat more species than any other bird in the British Isles.

Swifts glide across the water, taking sips as they do so. They make it look effortless, making use of puddles or even swimming pools. They often catch raindrops on the wing. In stormy weather, they are unable to catch insects during the summer months in the UK. They actively fly around the storm to eat. No other British bird is recorded doing this. 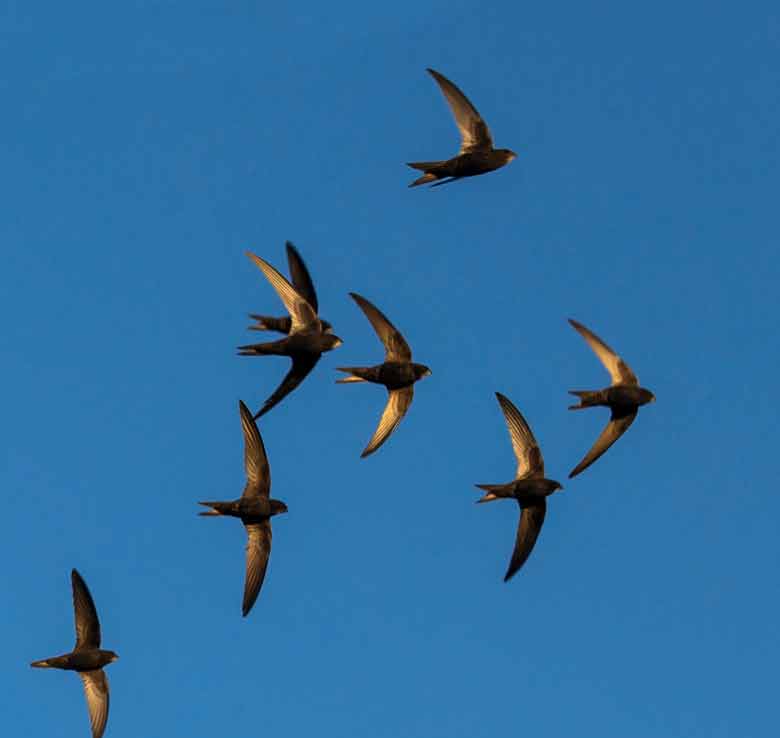 They migrate in July or late August, so earlier than Swallows. This is usually triggered by a lack of flying insects. It is a long migration – through France, Spain and then, onto Africa. They follow the rains as insects increase. The return journey occurs in late April or early May.

Swifts do have parasites, fleas and mites. One parasite called the louse-fly looks quite alarming. They are not harmful to people.

Swallows belong to the family of birds called Hirundinidae which includes Martins. Their average lifespan is 3 years and they do not live as long as Swifts. They are agile birds, feeding on insects and spend the majority of time on the wing. Unlike Swifts, you do see them on telegraph wires. With short legs, they can perch but do not really walk. Their front toes are partially joined at the base.

Swallows are small birds with a wonderful song. They have glossy-blue-black feathers on the back and the feathers underneath are pale. They have red throats and the long tail is more distinctive. They have a wingspan of 32-35 cm and are 17-19 cm in length. Swallows weigh between 16-25g. 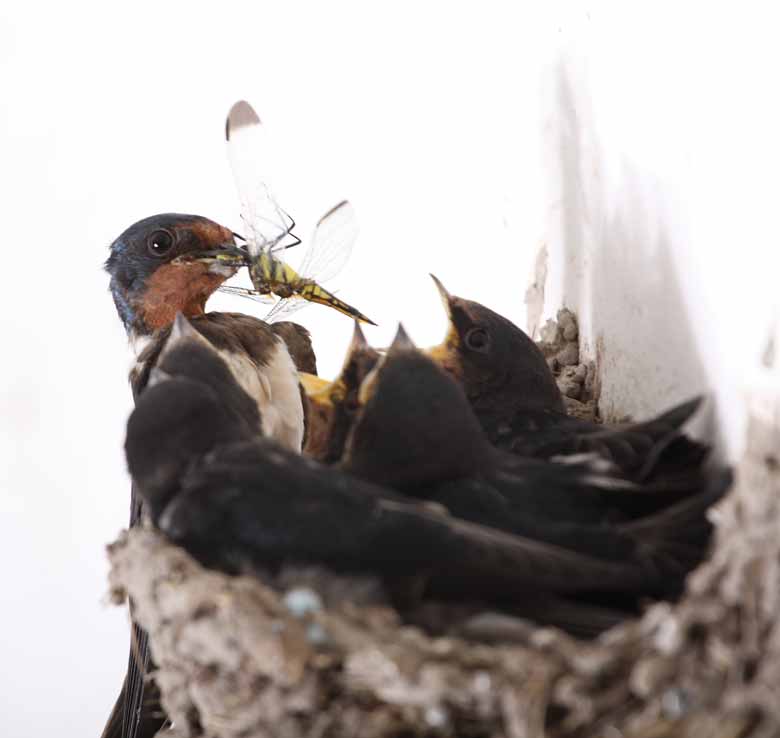 In the main, Swallows prefer to nest in outbuildings. They look for small, dark holes – approximately 50mm high and 200 mm wide. They will nest in barns, garages or under the eaves of houses. To encourage them, leave a garage window or outbuilding open for ease of access.

Swallows will make use of a platform if placed up high in a dark, undisturbed space. They are unlikely to use a nest box, unlike garden birds who capitalise on man-made bird boxes. If Swallows nest and you are worried about droppings, just place a bag or disposable sheet beneath the nest. Swallows are usually safe from the risk of predation but Sparrowhawks may be agile enough to take them in flight.

Sometimes, Swallows mob cats, birds of prey, Crows or Magpies if their nest is at risk. They will also mob people if need be.

Swallows carry parasites but these do not pose a risk to the birds or to people. It can make the adults abandon the eggs or offspring if an infestation occurs. 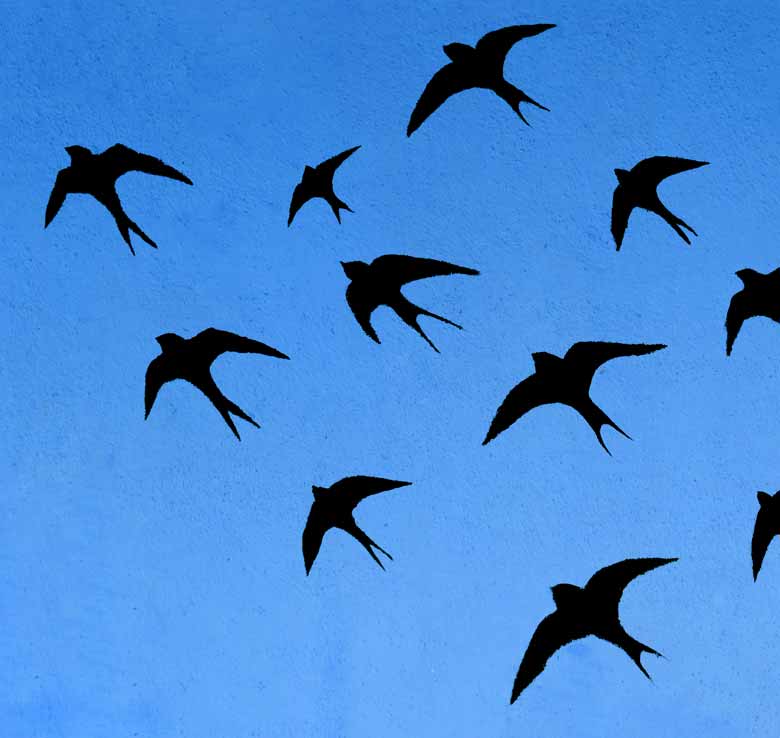 British Swallows spend the winter months in South Africa. They leave Britain later than Swifts in September or October. Their migration is considerable – flying through Western France, over the Pyrenees, into Spain, and through Morocco. Finally, they arrive in Africa. They migrate during the day and feed on the wing. It is important they build up their energy reserves to make this journey. Many birds suffer from starvation or exhaustion. If they encounter a bad storm, this can cause the demise of many birds.

For the keen gardener, Swifts and Swallows are welcome. Like many garden birds, they eat an abundance of insects and will bring a sense of energy to the garden. They are also great fun to watch.

If you design your garden with nature in mind, it will increase the number of insects, encouraging Swifts and Swallows to visit. If you have any dead trees, leave them alone, especially if you see an old Woodpecker nest. Swifts often colonise these available nests. If you have a water feature or a pond with flowing water, they may fly low and skim the surface as they drink.

Do you have any questions on Swifts or Swallows? Contact us here.

Leave a nice muddy patch in the garden too as this aids nest-building. Sit quietly and watch. The birds will not be deterred by your presence. Don’t forget to encourage other species of birds into your garden too. Add some bird boxes and feeders now and your garden will be a hive of activity from Spring through to Summer.

[addtoany url="https://homeandroost.co.uk/blog/blog-swift-and-swallow/" title="Do You Know the Difference Between A Swift and Swallow? >>REDIRECTED<<"]