Can Guinea Pigs Live With Rabbits? | 4 Reasons Why It’s a Bad Idea 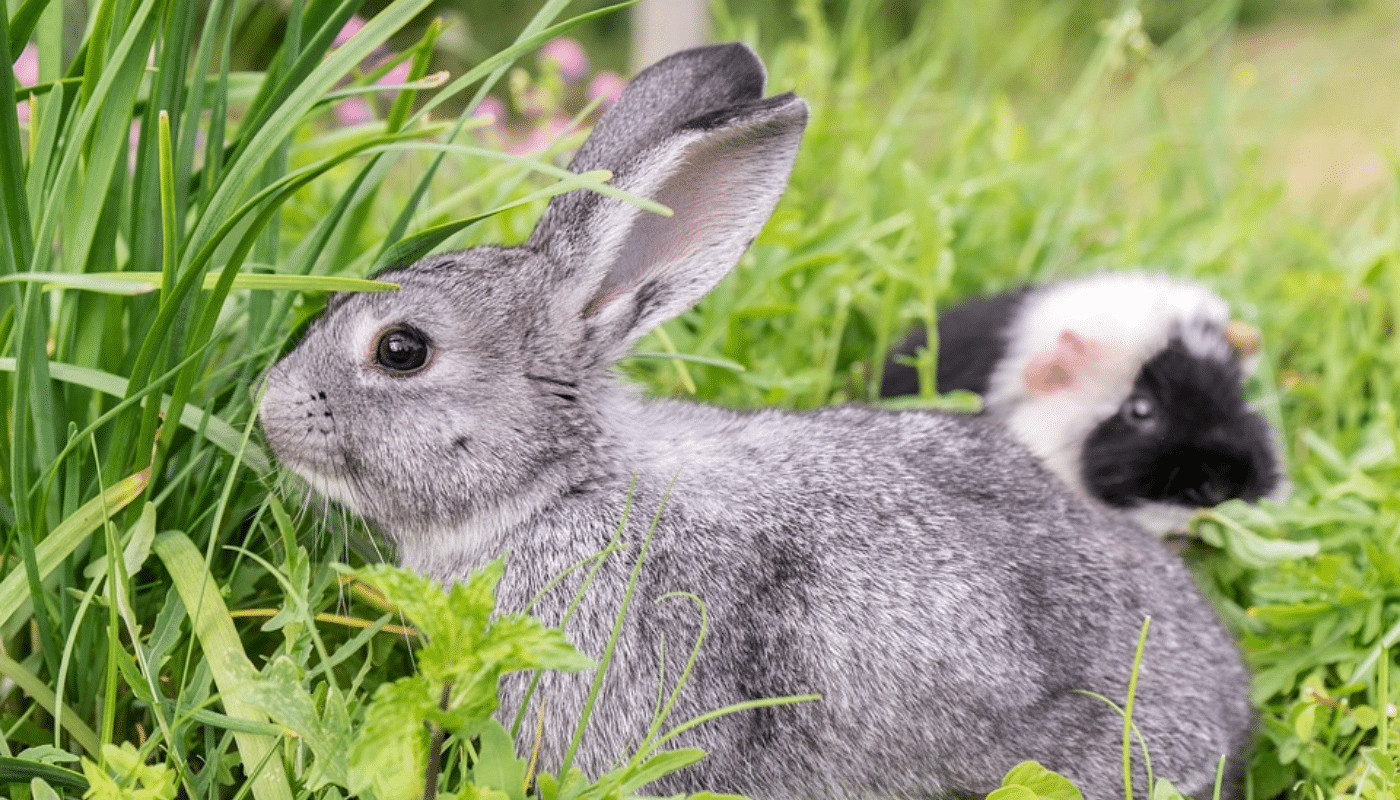 One of the more frequent questions we receive from readers at Home & Roost is can guinea pigs live with rabbits? If you want to find out the reasons why this isn’t a good idea, grab a cup of tea and carry on reading.

In the past, guinea pigs and rabbits were kept together in the same hutch to prevent unwanted fluffle of bunnies. This is because neutering small pets was still a relatively new thing and was thought of as unsafe. So instead of putting rabbits in with other rabbits, pet owners put guinea pigs in the same cage. Nowadays, however, neutering rabbits is a fairly straightforward procedure, so this argument falls flat.

Why Guinea Pigs and Rabbits Shouldn’t Live Together

Their diets are different

Even though both of these small animals eat hay and need fresh fruit and vegetables to stay healthy, a guinea pig’s dietary requirements are different from those of a rabbit. For example, guinea pigs need food that is rich in vitamin C, while rabbits will get sick if they get too much of it.

When they are living in the same hutch, it is very tempting to let them share food. By doing this, you are only meeting the needs of one of them, which can cause long-term health problems down the line.

Rabbits may be small, but guinea pigs are smaller, and not as strong as their floppy-eared counterparts. This difference is size and strength could put your guinea pig at serious risk. It could be out of boredom, or because bunnies are quite simply bullies, but they tend to get a little rough when ‘playing’, which can result in your cavy getting injured, or even killed. Rabbits are also known to bite or scratch guinea pigs.

Because guinea pigs are prey animals, they are always in flight or fright mode. Having a bigger animal in their space all the time will cause a cavy to become stressed, which could lead to all sorts of health problems.

They communicate and behave differently

Rabbits and guinea pigs are social animals and need companionship. However, they communicate very differently, and this lack of understanding can lead to frustration and aggressive behaviour. They also play differently. Rabbits like to jump around a lot and kick out with their back legs when they move. If a guinea pig happens to be in the way, it could get seriously hurt, or worse.

Rabbits, unlike guinea pigs, like cuddling up together and grooming each other, Guinea pigs not so much; they prefer their own space. And something else about rabbits. They love to mate and will do it all day, every day, even with a guinea pig. Not only will this constant attention stress a guinea pig out, but it could also result in a back injury for the cavy.

There are serious health risks

Although both animals are affected by the same diseases such as Bordetella bronchiseptica, it is much more severe in guinea pigs and can be fatal. A rabbit, on the other hand, shows very few symptoms, which poses a threat to a guinea pig in the same space.

Pasteurella is another disease that can go unnoticed in rabbits but can cause serious health problems for guinea pigs. The disease is often transmitted through saliva, usually from biting, which as we have already mentioned is something an aggressive rabbit will do to a guinea pig.

Tips to Keep Your Pets Safe

Of course, if your rabbit and guinea pig are happy hutch-mates, it might not be the best thing to separate them. Take a look at our tips to keeping your pets safe, even if they are together.

Create a safe space for your guinea pig

Just because they live together, it doesn’t mean they need to be in each other’s space all the time. A large hutch with a run is essential, as this gives a rabbit and a guinea pig the space they need to live together in harmony. Make sure that your cavy has a few spots where he can hide away or get some alone time. A tunnel is perfect for this, as long as the entrance is small enough to keep the rabbit out.

Remember, a guinea pig’s diet is different from a rabbit’s. Make sure they have their own food bowls and that they are in their allocated spaces when they are eating. This way, you know they aren’t only getting the right food, they are also getting the recommended amounts.

Ensure your rabbit is neutered

We have already mentioned a rabbit’s propensity to mate everything and anything. This isn’t only annoying for a guinea pig, it is also dangerous and can result in a severe back injury, or death. A neutered rabbit will be less inclined to mount its hutch-buddy.

We are not saying rabbits and guinea pigs can’t be kept together, but hopefully, it makes sense as to why they shouldn’t be. Have you had experience with guinea pigs and rabbits living in the same space? We would love to hear about it, so go ahead, and leave a comment below.

1 thought on “Can Guinea Pigs Live With Rabbits? | 4 Reasons Why It’s a Bad Idea”