Rabbits and Chickens: Can They Live Safely Together? 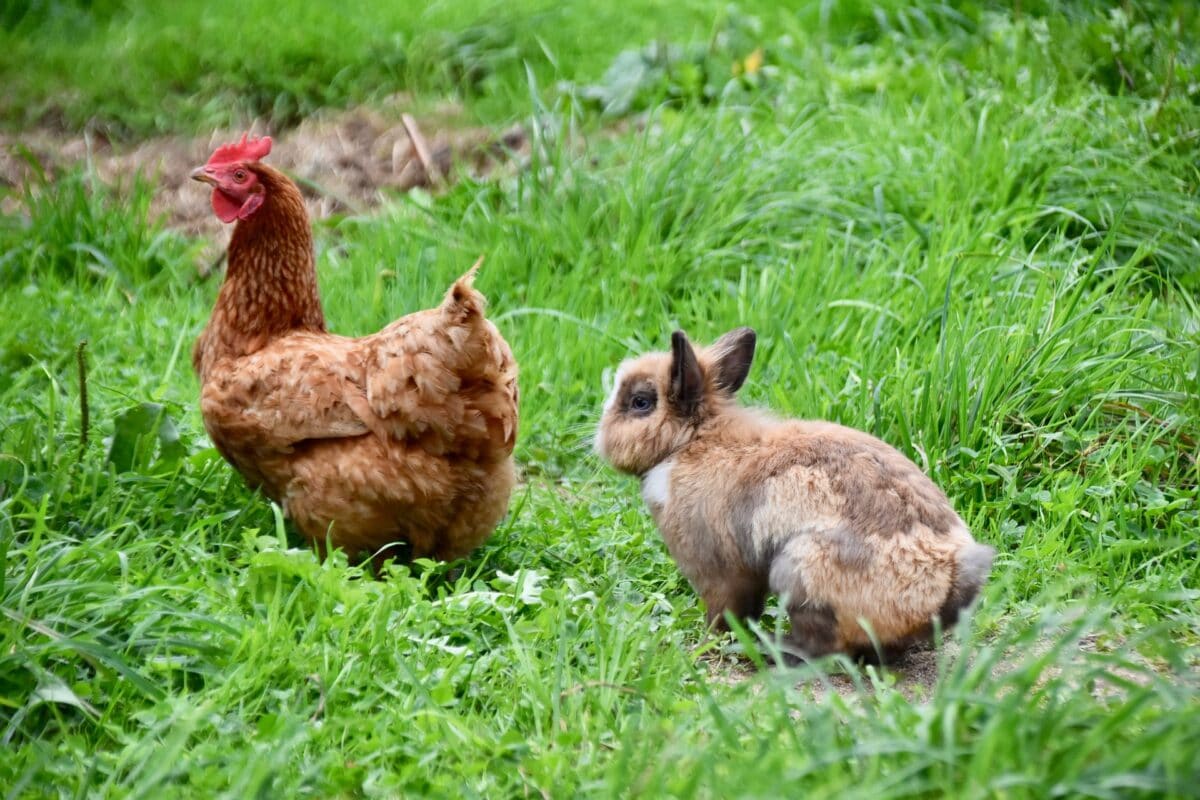 Rabbits and chickens have a lot in common. They both like company, their housing needs are similar, and they both also need their own space to retreat to when they’re feeling nervous. At the same time, keeping chickens and rabbits together raises some health and safety issues for both. So, can bunnies and chickens house-share? Or do they make better neighbours?

Benefits of Keeping Rabbits and Chickens Together

People do successfully keep chickens and pet rabbits together, and they have some strong arguments for their position.

Both chickens and rabbits need exercise space as well as a weatherproof and predator-proof place where they can shelter when necessary. Since bunnies and chickens have some of the same predators, some would argue that it makes sense to keep them in the same enclosure.

If you’re raising rabbits and raising chickens, you might find it space-efficient to keep all your animals in the same enclosure. Though they probably won’t want to sleep in the same place, a wire chicken coop can double as a run for both chickens and rabbits.

A single footprint for your animal housing can save a lot of space in your garden.

One enclosure, one run, one set of predator-proofing measures… There’s no doubt about it, rabbits and chickens sharing the same space will definitely keep costs down.

Both are Social Creatures

Rabbits and chickens are both highly social. Chickens living in the same coop with other chickens, and rabbits living with other rabbits, tend to be happier than single rabbits or just one chicken. Can these two species enjoy each other’s company? People who keep chickens and rabbits together believe that they can.

Dangers of Keeping Chickens and Rabbits Together

There are also compelling reasons to house your rabbits and chickens separately. Chickens pose some unique threats to rabbits, and whether your rabbits are pets or you breed rabbits for food, the small farm owner needs to make sure that everyone is protected.

Chickens Can be Aggressive Toward Rabbits

Rabbits are a prey species. A lot of animals eat chickens, too, but chickens are descended from predators, and some chickens won’t let you forget it.

Can you keep a bunny and a chicken together? Many people do. But you have to be careful to protect them both. Click To Tweet

Chickens are omnivores. Their diet may include worms, lizards, frogs, baby birds, and other small animals. Although they won’t attempt to eat a grown rabbit, a chicken may look on baby rabbits as food. Do chickens eat baby rabbits? They’ve been known to.

Chickens may also feel threatened by fast-moving animals. They may lash out at a rabbit out of fear. And a well-placed peck can pierce delicate skin or worse.

Another point of conflict is eggs. Bunnies don’t eat eggs, but rabbits love to explore, and a curious rabbit can accidentally damage an egg if they nudge it too hard. And chickens won’t be forgiving. In fact, chickens can be surprisingly vicious in defence of their eggs.

Chickens can be aggressive toward adult rabbits and rabbit offspring for numerous reasons, so it’s important to always be careful.

Are you familiar with the idea of a “pecking order”? This is how chickens establish a dominance hierarchy, and a rabbit under the same roof as a chicken may be treated like a fellow chicken when it comes to their “place” in the family.

On the opposite side of the coin, male rabbits may mount chickens, either sexually or to establish dominance. This could result in injury to either the chicken, the rabbit, or both.

Any animal living with another species, even in a large coop, may share some diseases.

Chickens carry diseases and bacteria that may not affect them, but can make rabbits sick. Bunnies carry diseases, too, and can likewise infect chickens.

Chicken poop is a particular concern. A passing rabbit can pick up a variety of diseases from chicken feces. You should take special care to keep avian feces out of your rabbit hutch.

Salmonella is endemic in chickens. However, it can infect rabbits and other animals and make them very ill. In rabbits, salmonella has a mortality rate above 90 per cent. If your chickens share their living arrangement with rabbits, salmonella will always be a concern.

Some Streptococcus bacteria are endemic in poultry, including chickens. However, different types can cause serious illness in rabbits, including acute respiratory distress syndrome. Some types can also cause a variety of serious avian illnesses.

Pasturellosis is caused by the Pasturella genus of bacteria. Some 20 to 60 percent of rabbits carry different types of Pasturella, and in most cases it does no harm. It can, however, cause upper respiratory disease in rabbits, and rabbits can pass the bacteria to other creatures, including chickens.

One type of Pasturella bacteria, Pasturella multocida, can cause Fowl Cholera in chickens. This is a very serious disease with a morbidity rate of up to 100 percent.

Myxomatosis is a rabbit killing virus that humans used in order to control wild rabbit populations. It worked a bit too well, however, and now, in many parts of the world, it’s a threat to pet rabbits as well. A rabbit contracting Myxomatosis will almost certainly die a painful death.

Chickens don’t carry Myxomatosis, and it doesn’t affect them. Rather, the Myxoma virus is spread by insects like fleas, which feed on both rabbits and chickens. When chickens live with rabbits, the same flea may bite both.

Once one rabbit in the coop develops Myxomatosis from flea bites or any other source, the others will as well, and you will have an epidemic on your hands that could prove fatal to all of your rabbits.

Chickens are omnivores. Their feed contains nutrients that a rabbit can’t digest, including calcium and protein. Chicken feed is also high in carbohydrates, which can lead to an imbalance in rabbit gut bacteria. This imbalance, in turn, can lead to GI stasis.

Rabbit food is specifically formulated for a rabbit’s dietary needs. And though rabbit food might not hurt a chicken, it won’t contain all of the nutrients necessary for a chicken to stay healthy.

Tips for Keeping Rabbits and Chickens Together

The keys to a successful communal coop for your chickens and rabbits are the same as the keys to introducing rabbits to one another and to other species. Specifically, start early, spay and neuter, and go slowly.

It’s almost always easiest to introduce babies to babies. Young animals can more readily accept other species as part of their community.

Both male rabbits and female rabbits can be territorial and aggressive. A male rabbit may also sexually mount a chicken or anything else in sight.

It’s always a good idea to spay and / or neuter your rabbits. This will prevent unwanted litters, cut down on aggression and territoriality or eliminate the behavior altogether, and protect your bunnies from certain cancers and other illnesses.

It can also help them to live more peacefully with other animals.

Don’t expect everyone to get on all at once. Give everyone time and space, regularly checking for signs of stress. Caught early, problems can be stopped before they become serious.

Take your tips from bunny bonding:

Once everyone can spend an hour or more together peacefully, you can think about starting to introduce them to a common space.

Never simply shove two different animals together in the same space and hope for the best. Just as you would have a separate hutch or separate hutch area for each rabbit while they are getting acquainted, so all of your animals should have enough space, separately, to live while getting to know one another.

Make sure that both your bunnies and your birds have a private place where they can get away from one another when they want some alone time. This is as important after bonding as it is during the process.

Bunnies and Chicks Can Be Friends

Can you keep a bunny and a chicken together? Many people do. But you have to be careful to protect them both.

Be wary of diseases that can jump from one species to another, and be alert to the possibility of conflict. Make sure everyone has a place to get away when they need a bit of private time.

Feed bunnies and chicks separately, and make sure that each has its own proper food. Keep your enclosure clean at all times, and take special pains to protect your buns from chicken droppings.

It can be done, but do it carefully and safely.

Do you keep birds and bunnies together? Do you have any tips for peaceful coexistence? We’d love to hear them!