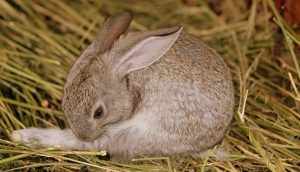 Rabbits have been praised for the role they play in the rehabilitation of those who are dealing with mental health issues, fighting addiction and post-traumatic stress. Two bunnies have been celebrated by Gloucester House in Highworth. The two bunnies, Wilson and Ebby were named after the founders of the AA. Gloucester House, a Salvation Army Treatment use the 12 step programme at the facility.

Rabbits have been kept at Gloucester House for over 6 years. The centre decided to celebrate their bunnies to mark International Rabbit Day on September 24,2016.  The job of caring for the rabbits gives people a sense of responsibility but they also provide comfort. They bring happiness to those who are working hard on overcoming their issues.

Wilson was rescued from an unhappy home five years ago. The female rabbit was neglected by her owner who had addiction problems and she was living in fear. When she arrived at Gloucester House she was very withdrawn. Her life has since been transformed. The transformation is a result of a unique bond that was formed between Wilson and a user of the services provided by the centre.

The service user was combatting mental health issues, post-traumatic stress and addiction and was not finding it easy to communicate with people. He bonded with the rabbit, spending time petting her and before long Wilson would run up to the gentleman whenever she saw him. That warm and welcoming behaviour has continued and Wilson will run to greet lots of the people using the services provided by the centre. Ebby joined the centre this year and both of the two rabbits have formed a close connection.  They are very close and will cuddle up together.

The rabbits are not the only animals that live at the centre. They also have a pond and an aviary that the service users take care of and maintain. Rabbits are kind and loving animals that provide comfort. The act of taking care of the animals and the affection they give to their loving owners play an important role in recovery.