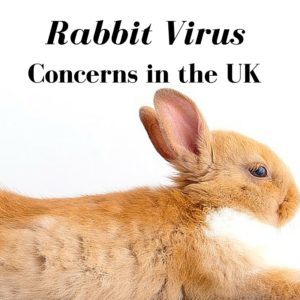 There’s a new deadly rabbit virus that is causing a lot of concern here in the UK. The RHD virus is a mutation of Rabbit Haemorrhagic Disease, RHD-2. At this present time, there isn’t a licensed vaccine that can be used to protect rabbits, which is a huge concern. The second concern is that no one knows how the disease is spreading. Many of the rabbit competitions across England have decided to close until a solution has been found.

The RHD-2 virus has been reported in several areas including Worcestershire, Cheshire, Leicestershire, Moray, Leeds, Devon and Shropshire. The virus has no symptoms; sadly an infected rabbit will just drop dead. Former strains of the virus have had visible signs such as bloody discharge from the nose.

What is the RHD Virus?

RHD is an infectious disease that is fatal to domestic rabbits and rabbits in the wild. The original strain was vaccinated against in the 1990’s, bringing the disease under relative control. RHD-2 was first confirmed in November 2015. The new strain is much harder to diagnose and the rabbits can carry the disease for longer because of the lack of symptoms. RHD-2 was first discovered in France in 2010 and is fairly common throughout mainland Europe.

It is hoped that a new vaccine will be quickly licensed to protect rabbits, possibly arriving as soon as next month. The county shows across the UK are being cancelled in a hope to prevent the infectious disease from spreading amongst rabbits. More information can be found on the British Rabbit Council website.