What do Wood Pigeons Eat? 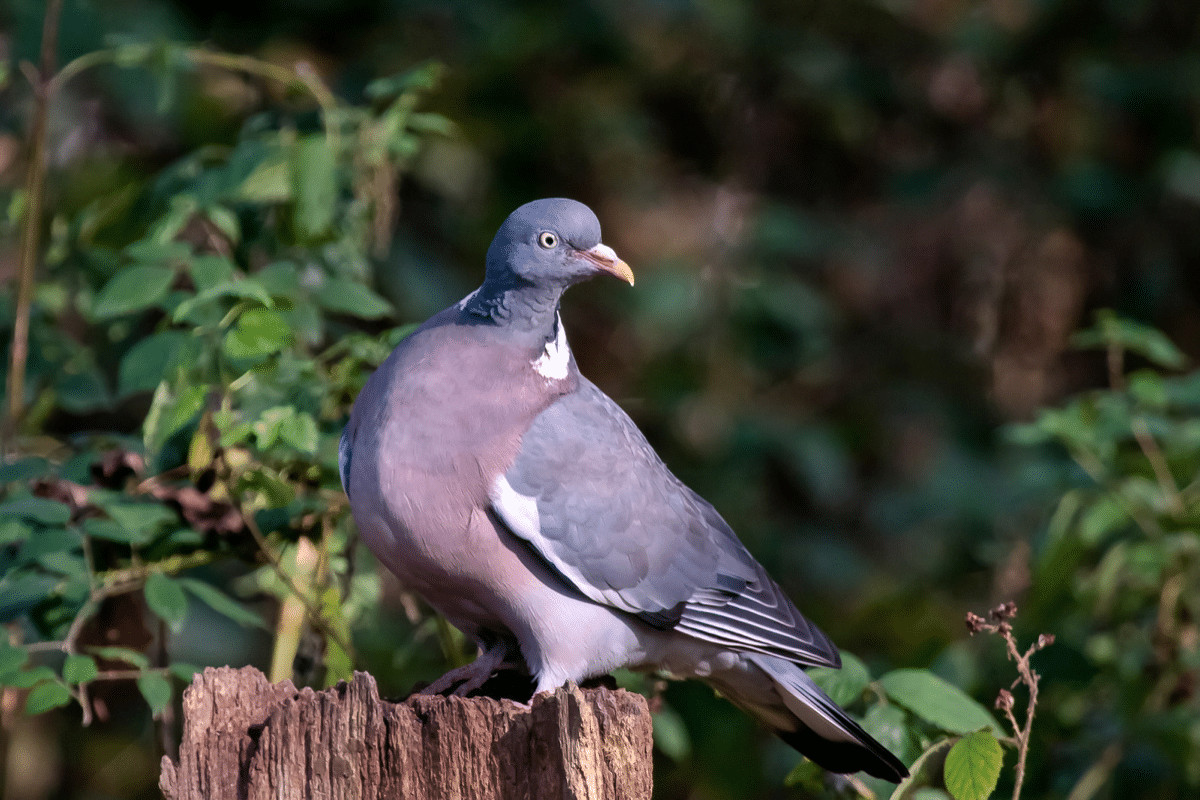 Love them or loathe them, the wood pigeon, (Columba Palumbus), is a common sight in most of our gardens. Once a shy, woodland bird wood pigeons are thriving in the UK – and they seem to always be hungry! So let’s take a look at what precisely these birds eat, and why, at a time when so much wildlife is under threat, wood pigeons are doing so well.

What Do Wood Pigeons Eat?

A Bit About the Wood Pigeon

The wood pigeon is one of our largest common birds. An adult bird weighs in at around a pound with a wingspan of over 2 feet. Contrast this to one of our other familiar garden visitors, the blue tit, who weighs less than half an ounce and has a wingspan of just six inches.

They typically live for around 3 years, but the oldest wood pigeon on record lived to 16.

Wood pigeons are naturally vegetarian. They live on seeds, nuts, berries, grains and buds/shoots of young plants. They form large feeding flocks and can do serious damage to crops of their favourite foods which include rape, cabbages and other brassicas. In the garden, they will eat pretty much anything you put on the bird table, especially peanuts, sunflower hearts and seed mix.

They mate for life, and whilst they stick to their pairs and are territorial during the mating season they flock for the rest of the year, sometimes in flocks of hundreds or thousands of birds.

Wood pigeons in the UK are sedentary and rarely move more than 10 miles from where they hatch. On the other hand, Continental wood pigeons are migratory, and in the UK, our native woodies are joined by flocks from Scandinavia each winter.

Wood pigeons are larger than our other pigeons and doves and are easily identified by the white patches on their necks.

There are more than 5.4 million wood pigeons in the UK, and their numbers are on the increase.

Wood pigeons are almost exclusively vegetarian. They enjoy nuts, seeds and berries, ivy berries are a winter favourite along with elder and hips.

They also eat grains and shoots, and this is where they start to get into trouble.

Wood pigeons love brassicas: sprouts, cabbages and rape. They will descend on farmers fields in huge feeding flocks and can do a tremendous amount of damage.

Wood pigeons are one of the few birds who seem to thrive in intensively farmed land. Indeed it’s thought that the increase in winter crops in the UK, particularly rape, is a factor in their increasing numbers. Food to sustain them over the winter means more survive to breed the next year.

At The Bird Table

Wood Pigeons will eat almost anything you put out on your bird table. But sunflower hearts, peanuts and seed mix are favourites.

Because they are so big, they need a lot more food than the smaller birds and can quickly hoover up everything you put out. Their sheer size can also be off-putting for smaller birds at the table, although they are not known for being aggressive towards smaller birds.

They generally prefer to feed on the ground or a table. But for big birds, they are pretty agile and will have a go at hanging off feeders too if they need to.

One good thing about wood pigeons is that they will sit under hanging feeders and clear up fallen seeds. This is a bonus if you want to avoid leaving food hanging around to attract unwanted visitors like rats.

If you find wood pigeons are becoming a problem in your garden there are several ways you can deter them and give the smaller birds more a chance. Take a look at our guide.

Probably the best way to feed your wood pigeons without letting them crowd out the smaller birds is to offer them grain on a ground feeder, positioned well away from your bird table and hanging feeders.

How Much Do Wood Pigeons Eat?

While some birds flutter around the garden pecking at the feeders then flying off and coming back again, wood pigeons seem to just settle in and stuff themselves. And this is precisely what they are doing.

Wood Pigeons are one of the bird species which have a crop. This is a pouch in the throat that you could think of like a doggy bag. It means that when the bird’s stomach is full, it doesn’t need to stop eating, it just diverts food to its crop and saves it there to digest once its stomach is empty.

An adult wood pigeon weighs in at around a pound with a wingspan of over 2 feet. Click To Tweet

A wood pigeons crop is enormous and typically contains around 3 ounces of food, but has been known to hold more than twice that amount. To put this into perspective, the crop can hold more than 1000 grains of wheat or 200 berries.

Wood pigeons will fill their crops several times each day, perching and resting between meals to allow for digestion.

During the day they usually eat up food at a rate of around 70 pecks per minute. But in the last couple of hours before dark, especially in the winter, they pick up the pace to 100 pecks per minute. At this time of day, they can afford to really fill up as they have all night to digest their food.

If you have wood pigeons in your garden, you will know they are regulars at the birdbath. It’s thought they need to drink a lot because their diet doesn’t contain much moisture.

They have a unique way of drinking too. Most birds use their beak as a scoop and tip their heads back to allow the water to slide down their throats. The wood pigeon can use his beak like a straw and just suck water up.

What Do Baby Wood Pigeons Eat?

Although pigeons’ primary breeding season is April to October, they can breed all year round. Part of the reason for this is how they feed their young.

Pigeons feed their babies on “crop milk” Adults regurgitate partially digested food into their crops then pass it into the beaks of their squabs.

So baby pigeons don’t need to be fed on special little morsels, they can eat whatever the adult is having. This makes feeding much more straightforward and is likely to be another factor contributing to the species’ success.

The Wood Pigeon – a Bird with a Healthy Appetite!

I’m not a great fan of the wood pigeon, We have far too many of them in our garden for that.

But when you take the time to look at them, they are a handsome bird. And you have to admire any wildlife that thrives off intensive farming.

Wood pigeons certainly don’t need our help at the moment, but if you do want to feed them seed mix, sunflower hearts or peanuts will all go down well. As will pretty much anything you put out for the birds!

We hope you’ve found this article interesting and useful. If you have questions or suggestions, we would love to hear them. Leave us a comment below.

2 thoughts on “What do Wood Pigeons Eat?”