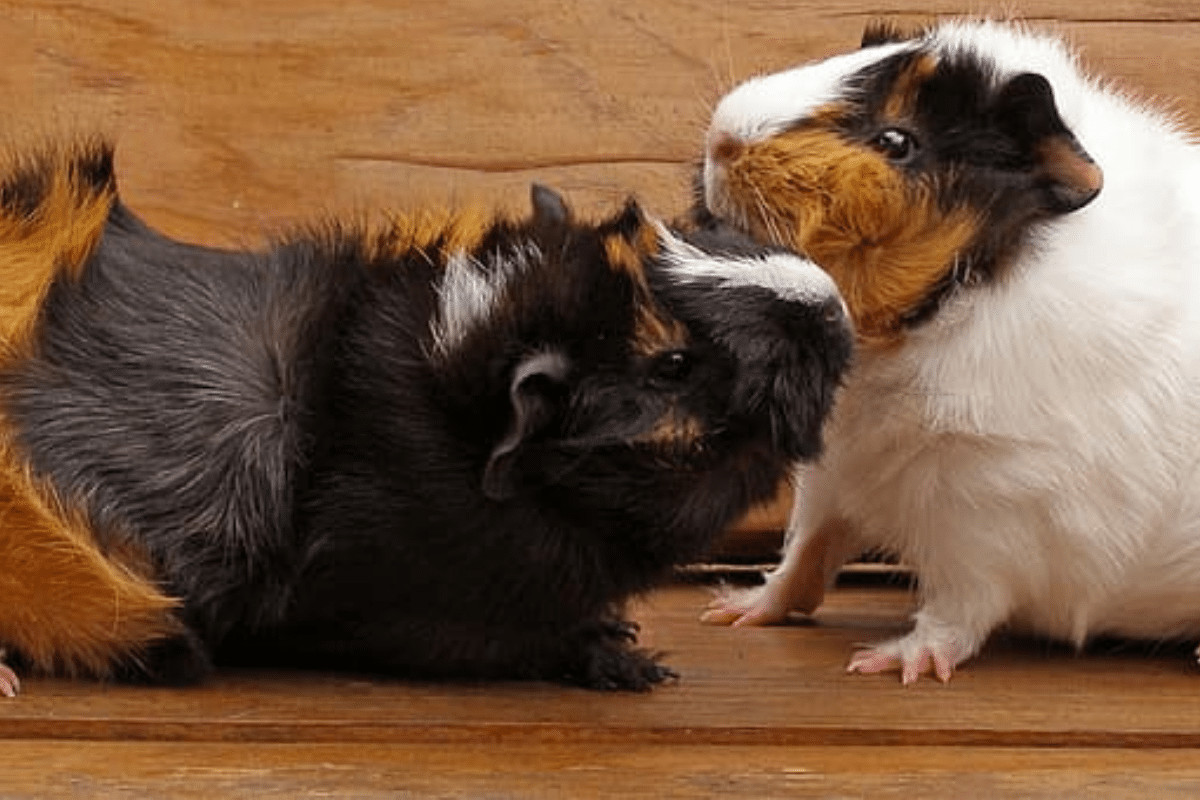 The British Cavy Council recognises as many as 30 different breeds of guinea pigs, and while they are all equally charming, it’s fair to say guinea pig lovers across the world often have their own personal favourite. In this article, we’re looking at the Abyssinian guinea pig. Although it is one of the more common guinea pig breeds around, their gorgeous coats and outgoing personalities certainly make them one of the most popular cavy choices.

So without further ado, let’s take a look at the Abyssinian guinea pig, from its exotic hairdo to its friendly personality and everything in between.

All About Abyssinian Guinea Pigs

At first glance, one of the easiest ways to recognise this particular breed is by its somewhat distinctive hairdo. Unlike other cavies, the Abyssinian has coarse, straight hair that stands approximately 1.5″ high, But that’s not the weirdest bit. They also have several rosette patterns or tufts of hair that turn outwards all over their body. This is ‘bedhead’ at its best!

On average, an Abyssian has between 6 and 8 rosettes, but in rare cases, they can have as many as 10. These beauties are usually ‘show’ guinea pigs.

But take note, it’s not only about how many rosettes an Abyssinian might have. For competition purposes, Abyssinians should have:

The Abyssinian also comes in a wide variety of colour combinations, including:

But regardless of how many rosettes or what type of colour combination it has, as far as we’re concerned, any Abyssinian guinea pig is a show-stopping winner!

Gorgeous Inside and Out

The Abyssinian guinea pig’s personality matches its outrageous coat. After all, you can’t be a wallflower with hair like that! They are loud, curious and always in search of an adventure. Guinea pig parents talk about them having their own unique habits and quirks, which is what makes them such a popular choice.

Males tend to be more outgoing than females, but unfortunately, their behaviour is sometimes misinterpreted as aggressive or naughty. If you are keen on this breed, you must be able to spend as much time with them as possible to stop unwanted or destructive behaviour. And never keep an aby on its own. This breed of guinea pig thrives on loads of attention and affection and loves companionship.

Looking After an Abyssinian Guinea Pig

All guinea pigs, regardless of the breed, need looking after. This includes a healthy diet of fresh fruit and vegetables, a clean hutch and run with plenty of space to run around, and the occasional grooming session. And an aby is no different except that it needs a little more grooming and a lot more attention.

We recommend brushing this breed every two to three days. Not only will this prevent tangles and matting, but it’s also a great way to spend time with your attention-seeking cavy. Regular handling and petting will also help you pick up on any health issues, which are often hidden by their coat.

Even though an Abyssinian is considered a short-hair breed, it still has a lot more hair than average smooth-haired cavy. This means you need to take extra care during summertime, when the high temperatures can cause overheating and even death. Keep your cavies cool with ice pods, run shades and plenty of water.

We receive queries about this particular breed from our readers regularly, so we thought it time we did a ‘frequently asked questions’ section.

Of all the breeds of guinea pigs, the Abyssinian is one of the friendliest. Click To Tweet

Carry on reading to find out everything you ever wanted to know about Abyssinians as pets.

Of all the breeds of guinea pigs, the Abyssinian is one of the friendliest. They’re vocal, outgoing and oh-so-charming. They love their humans and make great pets, as long as you are giving them the attention they need, or rather demand. Like most cavies, they don’t do well on their own and thrive with another cavy or two.

As a general rule of thumb, it’s common for these pets to live between 5 and 6 years. Of course, this depends on how it is cared for, its diet, lifestyle and genetics.

What is the difference between a Silkie and an Abyssinian guinea pig?

The most notable difference between these two types of guinea pigs is their hair. Quite simply put, the Silkie guinea pig has a good hair day every day, with silky soft straight hair that sweeps over its shoulders. An aby, on the other hand, looks like an 80s rock star with its rosettes and whirls, swirls and curls.

Does a Peruvian guinea pig need more grooming than an Abyssinian?

The Peruvian guinea pig’s coat is a combination of the Silkie’s long, soft hair and the Abyssinian’s distinctive rosettes on its back. But unlike both types, the Peruvian has what can only be described as an awe-inspiring fringe that is unique to this breed. Because of the length, the hair of a Peruvian needs regular grooming with a lot of attention to detail.

Is an Abyssinian guinea pig more active than other breeds?

Although all guinea pigs need a lot of exercise to stay happy and healthy, Abyssinians are incredibly active and can get up to serious mischief if left to their own devices. We recommend having loads of boredom busters around their hutch and run, including chew toys, balls, tunnels and hidey holes which will keep them busy, and out of trouble. But take note, hamster wheels and exercise balls are an absolute no-no for a guinea pig. Avoid these at all costs.

How much space does an Abyssinian need?

Because of its high energy levels and natural curiosity, an Abyssinian guinea pig needs as much space as possible. Not only should they have plenty of room in their hutch, but they also need a run. This gives them the opportunity to explore, forage and get much-needed exercise. If you have limited space, you should consider a folding run, which can easily be moved around, and collapsed for easy storage.

What health issues do Abyssinian guinea pigs have?

Abyssinian guinea pigs, like other cavy breeds, are unable to make their own vitamin C, which can lead to scurvy. Always make sure your pets are getting enough fresh fruit and vegetables in their diet. They’re also more susceptible to developing diabetes than other breeds, which means you need to keep a close on their weight and limit the number of treats you feed them.

Something else to be aware of when it comes to Abyssinians is that they are prone to various eye problems, including microphthalmia and cataracts. Any changes to the eyes could be an early warning sign of an ocular problem. Seek veterinary help as a matter of urgency.

That’s a wrap as far as Abyssinian guinea pigs go! Hopefully, we have covered all your questions, plus a few more. If not, just drop us a message in the comments below, and we’ll do our best to get you an answer.