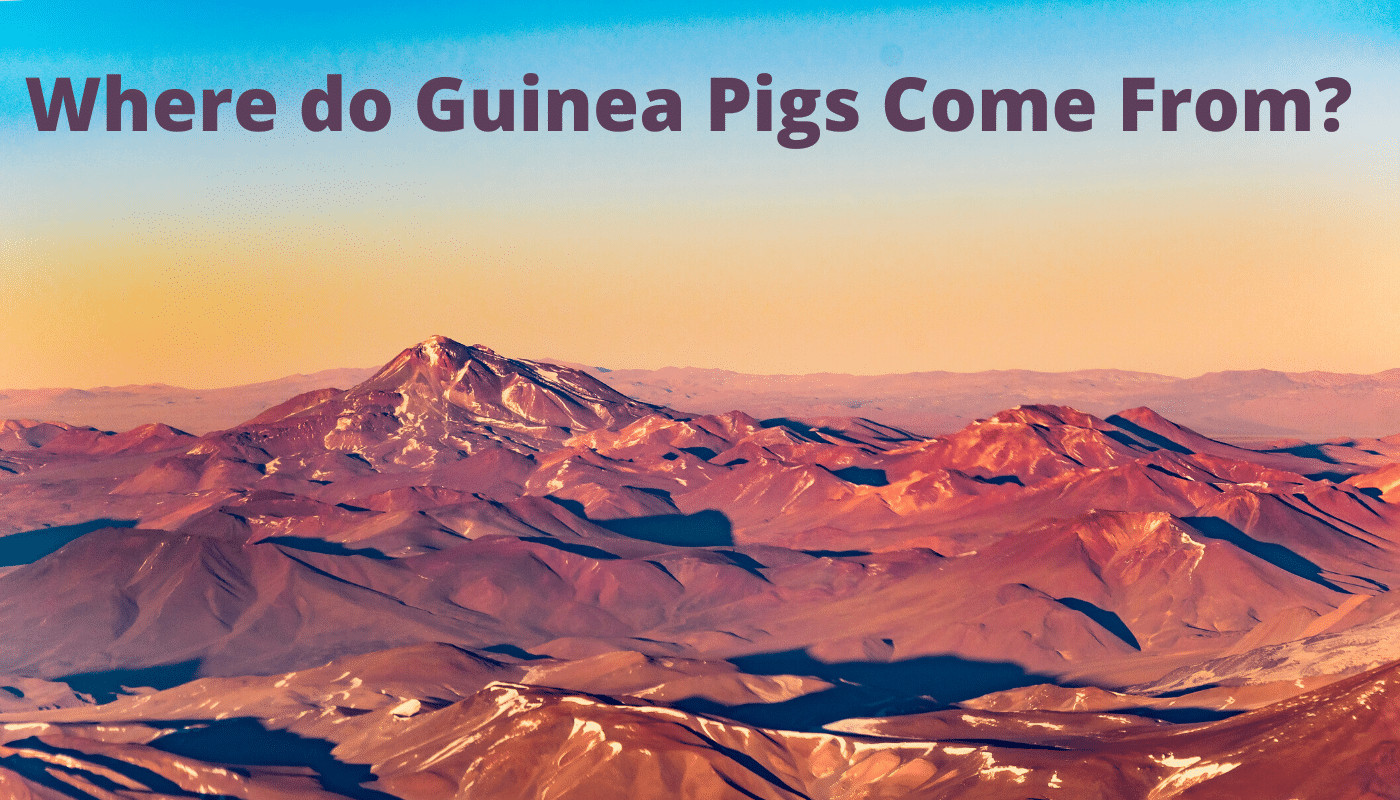 Have you ever wondered where your guinea pig comes from? Or why is it called a guinea pig? And what about skinny pigs? Are they guinea pigs that have been on a rigorous diet? We are answering all these questions and more in this article, so sit back, relax and find out everything you ever wanted to know about your cute little cavy.

Where do guinea pigs originate from?

Guinea pigs originated in South America, more specifically the Andes. It is believed that the Cavia porcellus, or cavy as they are commonly called, were domesticated by the people of Bolivia, Peru and Ecuador as early as 5000 BCE. They even appear in folk art around 500 BCE and 500 CE.

Why are they called guinea pigs?

No one is 100% sure where the name ‘guinea pig’ comes from, but it is believed it can be traced back to the 16th century when they cost one guinea. The ‘pig’ part is attributed to the fact that they looked like little pigs (and maybe tasted similar too).

Other languages also refer to them as pigs in some form or another. For example, in Germany they are called Meerschweinchen, which translates to ‘little sea pigs’, and in Portugal, they are called Porchitas da India or ‘little pigs from India’.

What animal is related to a guinea pig?

Contrary to what their name suggests, guinea pigs are not related to pigs. But they are related to larger rodents including chinchillas, capybaras, naked mole rats, pacas and porcupines.

What do guinea pigs eat?

Guinea pigs are herbivores and fibrevores, which means they eat grass, fruit, vegetables as well as fibre-rich pellets. Your cavy is similar to you in that it can’t make vitamin C, which means they need to get it from their food. Also, always make sure your piggy has access to fresh hay and water 24/7.

How many types of guinea pigs are there?

In the same way, there are different breeds of dogs and cats; there are also different types of domesticated guinea pigs. Some of the more common kinds include the Abyssinian, the Peruvian and the white-crested guinea pig. The most common, and popular breed is the American guinea pig, while the Alpaca is thought to be one of the most beautiful. A more recent addition is the skinny pig, which is a hairless variety.

Cavies lived in the wild before they were domesticated. And although it is hard to believe, your guinea pig was considered a food source before it was a pet. In some European and South American countries, they are still considered a delicacy.

It is believed that Queen Elizabeth 1 was one of the first proud owners of a guinea pig, which made them a popular pet for families around that time.

How long do guinea pigs live?

When cared for properly, guinea pigs can live up to eight years. If you are considering getting a piggy, it is worth keeping this mind because of the long-term costs and the time you will need to spend with them.

Can guinea pigs live on their own?

Although guinea pigs can live on their own, we recommend keeping two or more together. This is because as herd animals, they are incredibly social and need the company of other piggies. To keep harmony in the hutch (and prevent unexpected litters), it is best to pair same-sex guinea pigs together. One male with females is also good, as long as he has been neutered.

What noises do guinea pigs make?

Guinea piggies are real chatterboxes and make a wide variety of sounds to communicate. As you get to know your pet better, you will understand what the wheeks, grunts, squeaks, chirps and chortles mean.

Can guinea pigs live outside?

Guinea pigs can live outside; in fact, the more space they have to run around, the better. To make sure your piggies are happy and healthy, it is best to get a large hutch with different areas where they can play, eat and sleep.

Guinea pigs are at their happiest when they are playing. All they need is lots of space to run, and places to explore. They especially love tunnels and chew toys. Time outside the hutch is essential, but be sure to keep your cavy away from poisonous plants and flowers.

What are baby guinea pigs called?

A female guinea pig is referred to as a sow, and a male is called a boar. A baby guinea pig, on the other hand, is called a pup and weighs around 100 grams when it is born. Unlike a lot of baby animals, they can stand on their own at birth. Because wild guinea pigs are prey for larger animals, they are born with their eyes open and can run straight away.

When can a baby guinea pig go outside?

Even though baby piggies can see, eat and run when they are born, it is essential to remember that they aren’t as robust as an adult. It is best for them to go outside when they are between six and eight weeks old, and preferably when it is sunny and warm. To ensure its safety, make sure your baby piggy can’t squeeze through the hutch or run wiring.

Guinea pigs don’t only make the best pets, they are also fascinating as a species. Do you maybe have an interesting fact about these furry little creatures? Or maybe your piggy has a unique quirk or characteristic? We would love to hear from you, so leave a comment below.