How To Tell If Your Rabbit Likes You 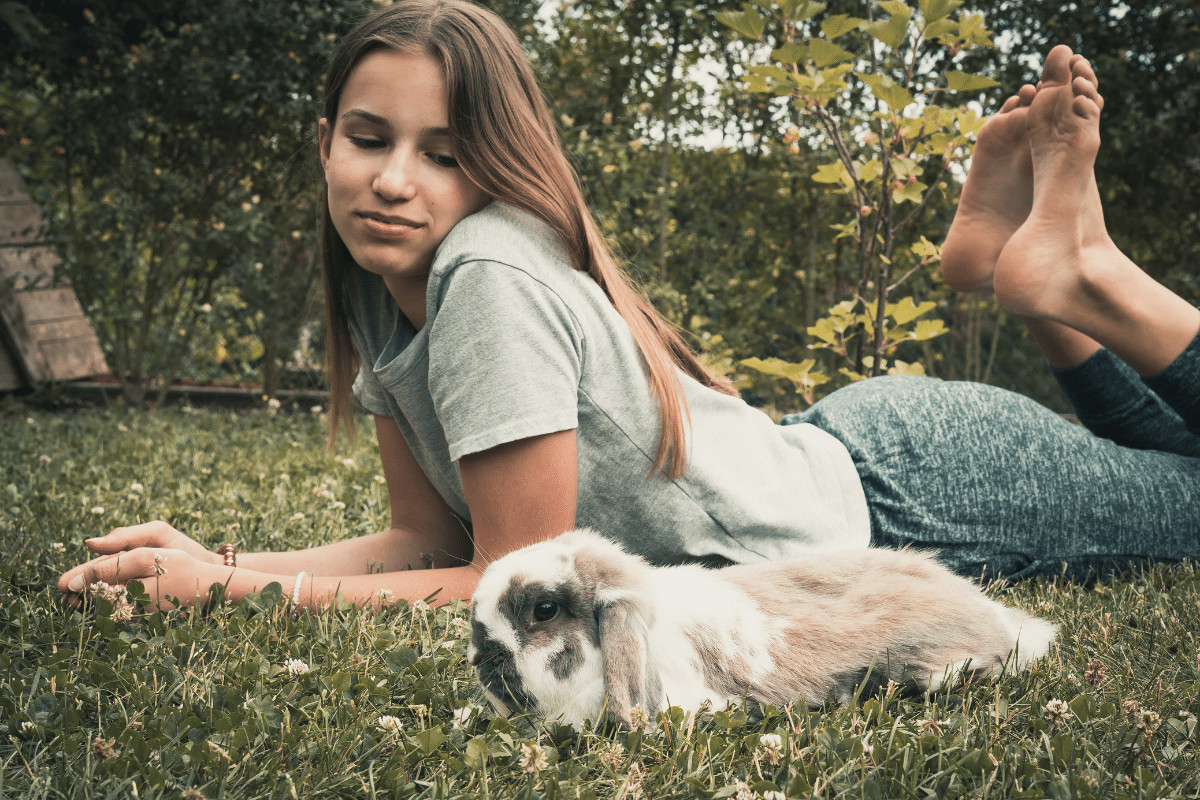 Loving a bunny is different from loving a cat or dog. This is because they’re very different animals. Rabbits are affectionate; they just express it differently. And if you don’t know what to look for, it’s easy to miss the signals.

Are you ready to learn about rabbit body language?

How are Rabbits Different?

Cats are predators, and are generally solitary. Dogs are scavengers that live in packs. If you watch these animals closely, you can see how these factors affect the way that they relate to their humans.

Bunnies express affection differently from cats and dogs. Here’s how you can tell that your rabbit likes you:

Cats are notoriously aloof, for example. And they like to play stalking and attack-type games. Dogs, on the other hand, want to be part of the group. Dog games like tug-o-war and chase are how wild canines learn to scavenge food and get along in a pack.

Wild rabbits are prey animals. They live in burrows in large groups.

What does this mean?

Most bunnies will be affectionate when they feel safe with you. That may take a while, though. Click To Tweet

First, bunnies crave social interaction. Most feel unhappy unless they have another rabbit for company. Human affection can sometimes suffice, but most bunnies feel they need a buddy.

At the same time, many animals eat rabbits. As a result, every bunny assumes that a larger animal will try to eat them. It may take a long time to prove to your rabbit that you’re an exception.

Bunny games are different from cat and dog games. Rabbits don’t want to be chased. They won’t bat at a string, and they won’t understand tug-o-war. Also, unlike many cats and dogs, most rabbits don’t like to be cuddled.

Most bunnies will be affectionate when they feel safe with you. That may take a while, though. And when it does happen, bunny love will look different than cat and dog love.

So, how do rabbits express their affection?

8 Ways Rabbits Say ‘I Love You’

How do you know your pet likes you? Learn to read their body language.

If your rabbit loves you and is happy to see you, it may zoom in circles around your feet.

If it circles around your feet while honking, on the other hand, is a different kind of love. That’s a mating dance!

Rabbits have scent glands under their chin. A rabbit may rub its chin against a toy, its hutch, another bunny, or even a person to say ‘this is mine.’ Cat body language is similar in this way.

Rabbits may also scent-mark something interesting to remind them to come back to it later.

If your rabbit “chins” you or bumps you with its nose, take it as a complement! They’re saying that they like you enough to claim you as their own.

When bonding two rabbits, one of the first signs of success is that the rabbits are grooming each other. This is true of a human-rabbit bond, too. If your rabbit is grooming or licking you, they’re saying that you’re part of the family.

Flopping Down Close to You

Flopping is one way you’ll know that your rabbit is relaxed. If they do it close to you, then you know that they’re not just content in your presence, but truly enjoying themselves.

A binkie is your rabbit literally jumping for joy. And once you’ve seen it, it’s impossible to mistake a binkie for anything else.

Sitting On Your Lap

This is one of the ultimate expressions of trust. If your rabbit loves to sit down next to you, especially if it’s grooming or licking you, too, then you’ll know you’re in. And if your pet climbs into your lap of its own accord? Then there’s no denying that your rabbit loves and trusts you.

Coming Over For Pets

Your bunny may never feel safe enough to sit in your lap, or to be held. But that doesn’t mean it doesn’t like you.

Even if it doesn’t want to cuddle human-style, your pet may approach you for polite attention while you sit on the floor.

Be certain to have a treat on hand for when they do.

Purring When You Pet Them

They make the noise a bit differently from cats, but it sounds really similar and has a similar meaning. That meaning is that your rabbit is not only happy, but happy to be petted by you.

How Do You Know if Your Rabbit Doesn’t Like You?

Rabbits are very good at making their displeasure known. If a rabbit doesn’t like you, however, it’s likely that it’s simply frightened of you. How do you know?

Ears back is often the sign of your bun is feeling annoyed. Always let your rabbit calm down before approaching them.

Rabbits thump a hind foot when they’re feeling frightened. It’s how they signal to other rabbits that there is danger about. If your rabbit thumps when you approach, it’s showing that your rabbit is afraid of you.

Tooth-grinding can be a way of showing anxiety. It can also be a sign that your rabbit is feeling pain. If your rabbit grinds its teeth when you’re holding it, then it may be afraid to be held.

If your bunny grinds its teeth generally, however, a trip to the vet may be in order.

Lunging at you is your rabbit showing that it wants you to back off. Your rabbit may be feeling frightened and want you to leave. It might also be feeling territorial.

A lunge is often followed by a bite if the offending party doesn’t vamoose. So if your rabbit lunges at you, leave it in peace.

This is one way that rabbits, dogs, and humans are similar. Whimpering signals fear, anxiety, and sometimes injury.

You Can Get Past This

If your pet is frightened of you, don’t worry. More often than not, you can win a rabbit over with kindness and patience. But you have to do it on their terms.

Do Rabbits Know When You Kiss Them?

Your rabbit is probably aware that you’re touching them. At the same time, kissing is rare in the animal kingdom. And less than half of human cultures practice kissing at all.

So will your bunny understand the meaning of a kiss? Probably not.

So if your pet is comfortable enough to sit happily in your arms, try rubbing your chin on the top of its head instead of kissing. This will tell them ‘I love you and you belong to me’.

Rabbits are cute and fluffy, and look as if they were made to be cuddled. But the truth is, most rabbits do not enjoy being held. If something picks a rabbit up in the wild, it’s because that animal intends to eat it.

Many rabbits can be taught to trust you enough to pick them up, however. Rabbits also have other ways to show affection.

If your pet rabbit trusts you, it may flop down next to you. It may lean against you, and it may even sit in your lap.

If you do pick up your rabbit, make sure to do so properly, to avoid injury to both you and to the rabbit.

Rabbits are affectionate, and most love to spend time with their people. But they show their love differently. If you want to win your rabbit’s heart, you have to show them you care on their terms.

Make sure your pet is relaxed. Never run or chase after them, especially if they run away. Be patient and pay attention to signs of pleasure, as well as signs that your pet is afraid or overwhelmed.

Sometimes all it takes is a bit of attention and understanding.

How does your rabbit say ‘I love you?’ Tell us about it!