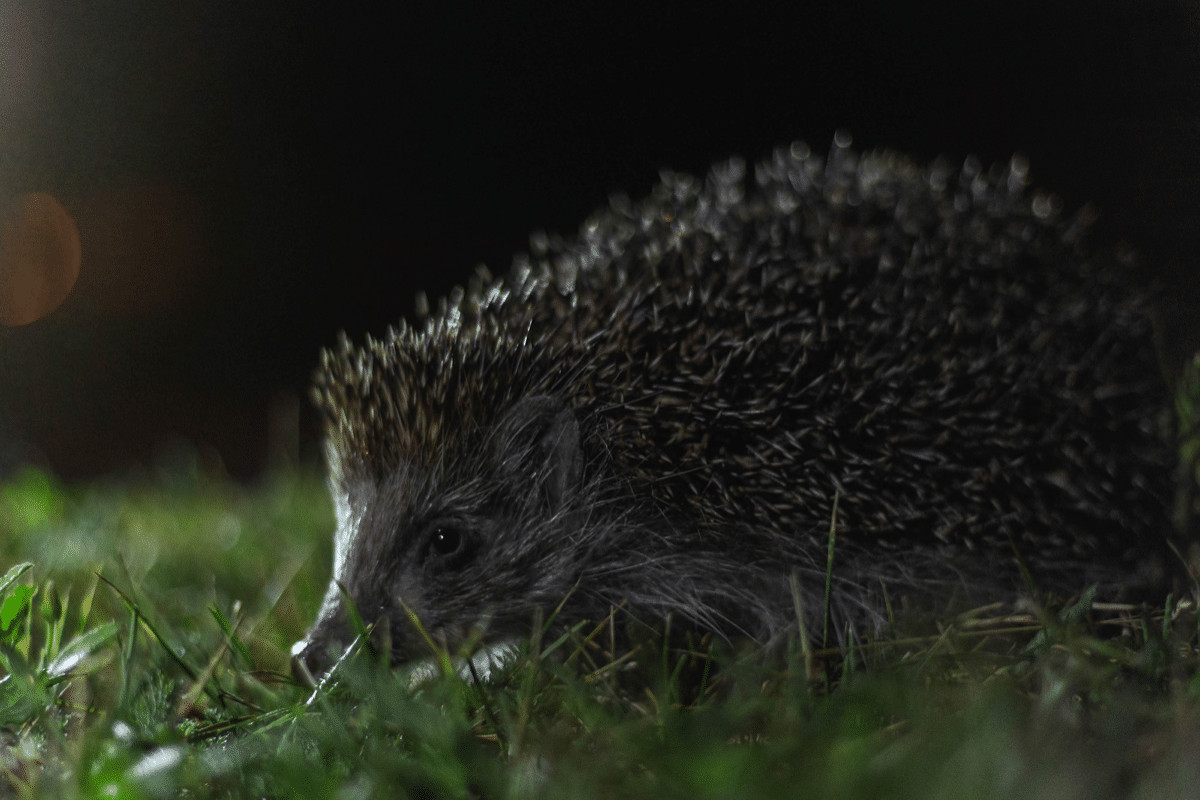 Hedgehogs are nocturnal, they go about their business at night and sleep in the daytime. But have you ever wondered why they live this way? Are they especially adapted to life in the dark? What other creatures share their nighttime world and what does it mean if you see a hedgehog out in the daytime? Let’s find out.

What Does It Mean To Be Nocturnal?

Hedgehogs sleep in the day and attend to business at night.

What they’re doing at night is mainly eating. Hedgehogs need to eat a lot of food for their size. They will eat up to 100 beetles and other invertebrates in one night.

To gather all this food, they travel over quite a large area – up to a mile each night. They prefer to travel through hedgerows, undergrowth and long grass. These habitats offer good chances of finding food and cover from predators.

As well as all this eating hedgehogs court and mate at night (a very noisy business that you may have overheard). They also build nests and hibernacula at night.

So as you can see, the night shift is a pretty busy time if you are a hedgehog.

Why Are Hedgehogs Nocturnal?

There are a few reasons why animals have evolved to be nocturnal.  Some of these may apply to the hedgehog.

What Other Nocturnal Creatures Do We Have in the UK?

It’s all going on out there at night, and the hedgehog certainly doesn’t have the place to himself.

The hedgehog shares his nighttime world with other mammals including foxes, badgers, bats and some otters and deer.

Then there are the birds, most notably owls of course.

Many toads and frogs are nocturnal And the in the insect world moths and glow or s, which are actually beetles, so very interesting if you are a hedgehog.

At dawn and dusk crepuscular creatures including rabbits and many deer, join in the action.

Other creatures like shrews and many of the rodents only sleep in short bursts and can be active both day and night.

Are Hedgehogs Specially Adapted for Living in The Dark?

Some night animals like foxes and owls have spectacularly good night vision. This is achieved by having a layer of light reflective cells in the eye, which is why we often see eye-shine in photographs of foxes and badgers caught at night. We know that hedgehogs do have this adaptation as the same shining effect can be seen. Many people have caught it on trail cam.

But this doesn’t mean that they have excellent night vision. In fact, it turns out that the hedgehog’s eyesight is pretty poor both day and night.

It’s thought that this is because of the environment they live in.

Hedgehogs prefer to live in dense vegetation. Their view is usually going to be pretty obstructed. So if the environment means you can’t see more than a few inches in front of your face, there is little point developing amazing eyesight.

They compensate with a fantastic sense of smell. We have a clue to this from their long, extended snout which protrudes well past their mouths and is constantly moist and twitching to scent the air. Studies have shown that internal scent organs and areas of the brain associated with smell are also well developed.

A hedgehog can sniff out a grub or other food buried up to 3 inches underground, according to Pat Morris. And they are believed to recognise other individuals and the presence of mating hormones through scent.

Their sense of touch is also well developed with the long guard hairs around the face being particularly sensitive.

Hearing, on the other hand, is thought to be less useful than that of the majority of mammals. Again, I guess this makes sense, as in dense undergrowth sounds must be confused by obstacles around and by the constant rustling of vegetation.

What Does It Mean If I See a Hedgehog Out in The Daytime?

Seeing a hedgehog out in the daytime is not generally good news.

Some creatures, like rats and shrews, only sleep for short periods and can be active both day and night, though they often prefer one to the other.

The hedgehog, on the other hand, is truly nocturnal and evolved to sleep through the day and come out at night.

So if you see a hedgehog out in the daytime, it’s usually an indication that it is ill and needs to be taken to a hedgehog rescue.

There are a few exceptions to this. During the long summer days, and consequently short summer nights, hedgehogs are very busy mating, building nests and raising and feeding young. At these times there may not be enough hours in the night to get everything done.

So it’s not unusual to see a hog out and about in daylight, especially in the early mornings or evenings. These hogs though will look busy and purposeful, in sharp contrast to hogs weaving around looking drunk, or “sunbathing” on your lawn, who is definitely ill.

We’ve written a post on what to do if you see a hedgehog out in the daytime – take a look here.

The Night’s Alright for Hedgehogs

As diurnal creatures ourselves, or creatures who live in the daylight, we find it strange to imagine that animals can live out their lives in the dark. And as we know, working constant night shifts can cause serious long term health issues for humans. We’re just not adapted to live that way.

But the hedgehog is. There are good reasons for the hedgehog being nocturnal, and she is well adapted to take advantage of all that the night has to offer.

1 thought on “Are Hedgehogs Nocturnal?”