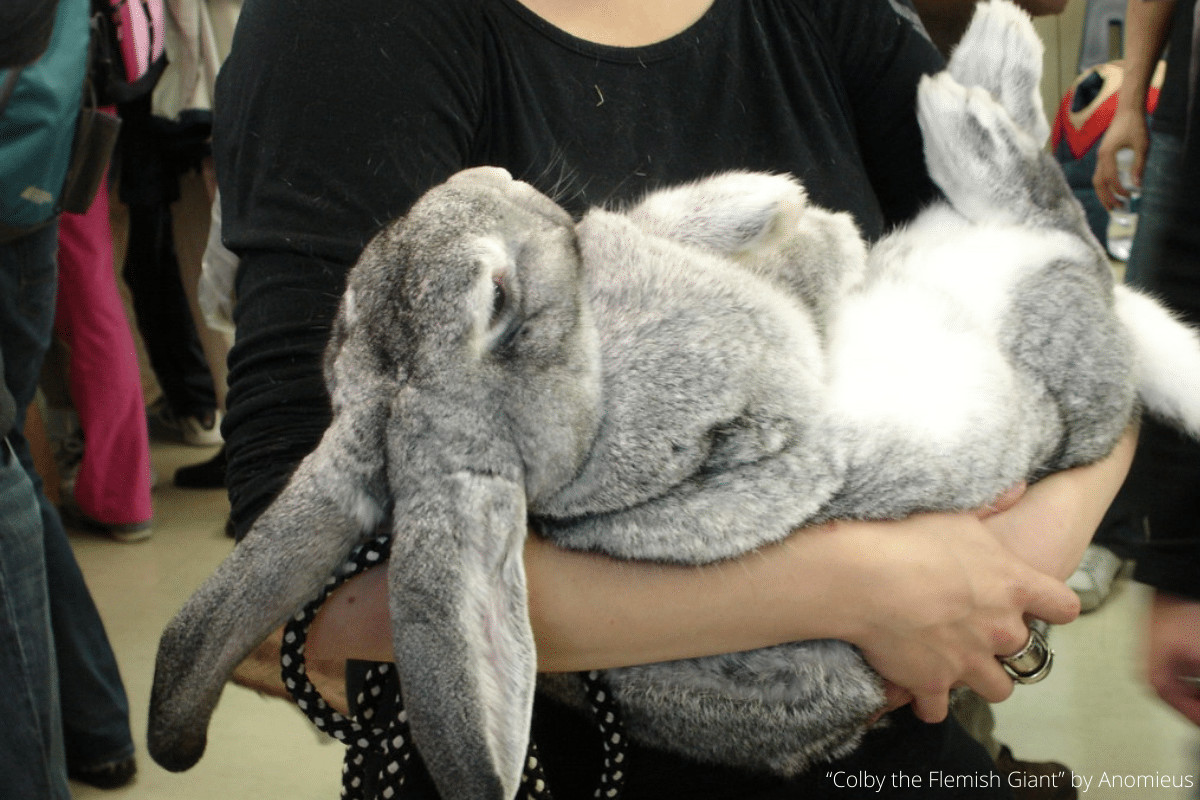 History of the Flemish Giant Rabbit

The Flemish Giant is an older breed. Its origins date back to the 1500s in Flanders (now northern Belgium). There, giant rabbit breeders combined a variety of meat and fur breeds to create the ultimate meat and fur rabbit.

It wasn’t until after 1910, though, that the Flemish Giant’s popularity began to soar. This was the year that this rabbit breed started appearing at fairs and livestock shows.

Today the Flemish Giant rabbit is still a source of meat and fur. But many people keep them as pet rabbits, too.

How Big is the Flemish Giant Rabbit?

Is this picture for real? Absolutely. As you can see, some members of this breed can reach the size of a medium-sized pet dog like a Shetland Sheepdog. 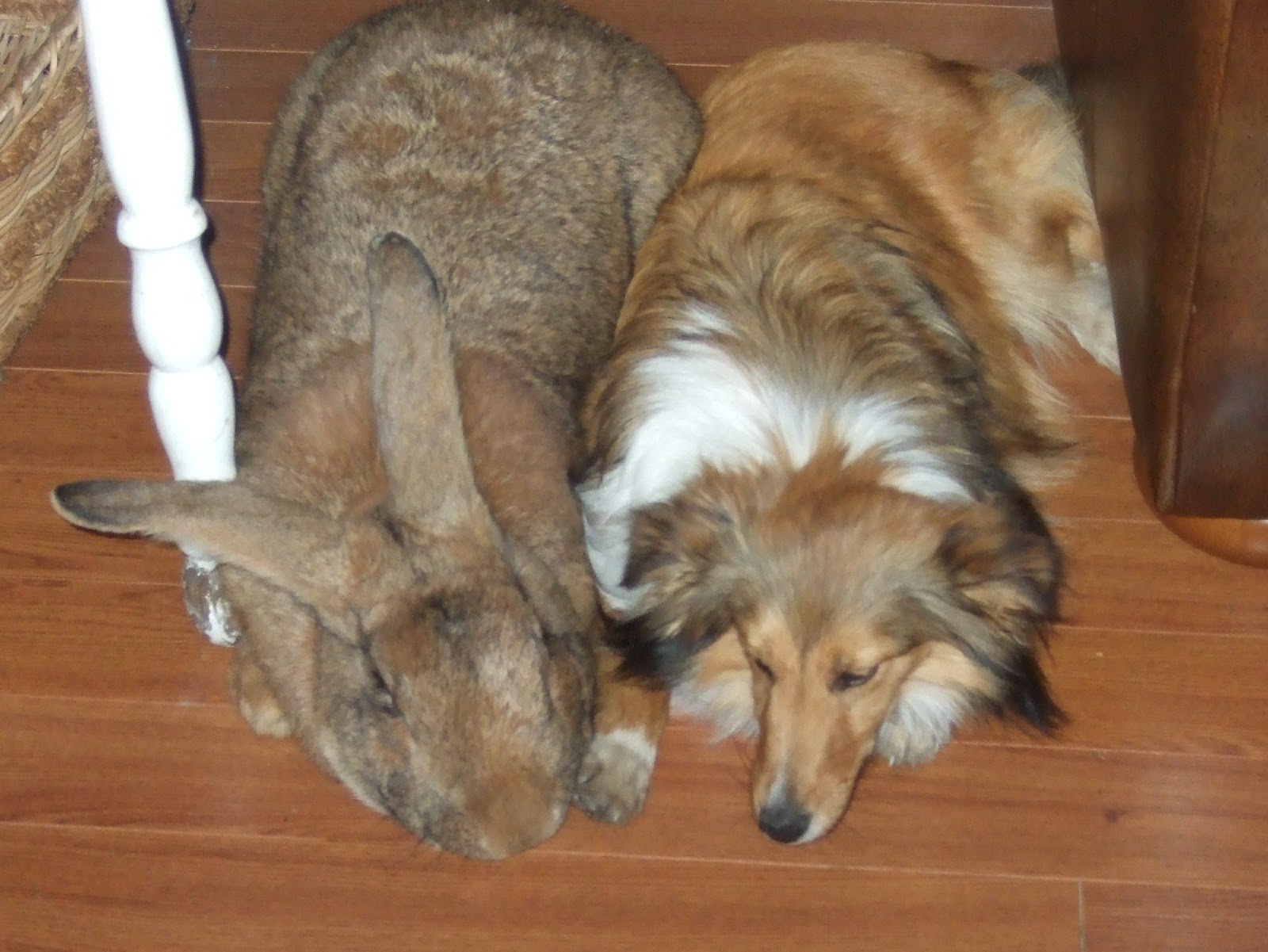 The average Flemish Giant weighs about 15 pounds (6.8 kilograms), though the breed can get even larger. Some of these rabbits can even reach up to 10 kilograms (22 pounds). The longest Flemish Giant rabbit ever recorded was four feet three inches long!

Flemish Giant rabbits have a long, muscular body with wide hindquarters. These rabbits are considered a “semi-arch” breed, as their spine has a noticeable, though the not extreme arch.

Flemish Giant bucks and does have a few different characteristics. Bucks have a much larger, broader head. Does, on the other hand, often have a full dewlap. It can take Flemish Giants up to a year and a half to reach maturity.

Many have described the Flemish Giant as a gentle giant. As a breed, they tend to be calm, docile, and sweet-natured. Of course, individual personalities can vary. Also, your rabbit’s background may influence how it interacts with you and your family. On the whole, though the Flemish Giant makes an excellent family pet.

The Flemish Giant is an intelligent pet. Like most rabbits, you can train them to use a litter box. They’re also capable of learning tricks. Also, their size allows them to live safely with other pet animals, and many enjoy doing so.

At the same time, as big as they are, Flemish Giant rabbits are still rabbits. This means that they’re prey animals. They may become nervous or frightened more easily than you might expect from an animal that large. And, as we all know, frightened rabbits sometimes kick, scratch and bite.

So it’s important to take special care with Flemish Giants, as they’re large enough and muscular enough to do real damage if they feel threatened.

What to Feed Your Flemish Giant Rabbit

Like all rabbits, the Flemish Giant should eat a diet consisting mainly of fresh hay and grass. Many experts recommend the following dietary parameters:

Also, make sure your Flemish Giant has access to plenty of fresh water at all times. All rabbits are sensitive to heat, but the Flemish Giant’s size means that they’re even more so. Having plenty of water available can help.

Flemish Giants have an appetite to match their size. If you’ve owned different types of rabbits before, the appetite of the Flemish Giant may surprise you.

Feel free to supplement your big pal’s diet with plenty of rabbit safe fruits and vegetables. These may include:

A Few Words of Caution

Rabbits’ digestive systems are complex and delicate. All rabbits are prone to digestive problems. To reduce this risk, introduce new foods slowly, and one at a time. This will help your rabbit’s digestive system to adjust.

Once your rabbit has become accustomed to different types of vegetables and greens, feed them a variety daily. Give them small amounts of many different foods, rather than a large amount of one type. This will help them to develop and maintain healthy gut bacteria.

Also, be very sparing with fruit. Bunnies love sugar, just like we all do. But, just as with people, too much is bad for them. It can not only cause weight gain, but also tummy upset. So treat fruit like dessert. Fruit also makes a great training treat!

When feeding peppers, apples, cherries, peaches, and apricots, make sure to remove all seeds, pits, and stems, as these can be toxic for rabbits.

Caring For Your Flemish Giant Rabbit

With proper care and feeding, your Flemish Giant can be part of your family for five to ten years.

Start with a Rabbit MOT. Once a week, check your rabbit all over. Look for:

Also, pay special attention to your rabbit’s backside. Urine and faeces can attract flies and irritate sensitive rabbit skin. Age and injury can make it harder for a rabbit to groom itself. So, if your rabbit needs help cleaning itself, use pet-safe wipes for safe, gentle cleanup.

But never bathe a bunny!

Flemish giants have a thick, short coat. This is good news because a short-haired rabbit requires a lot less in terms of grooming.

You won’t need to give your Flemish Giant rabbit an elaborate brush out. But most rabbits love a gentle going-over with a slicker brush. Brushing your rabbit can also be a great way to bond with them.

Your rabbit’s nails are constantly growing. So make sure to trim them once a month using a nail clipper made for pets.

Be careful, though. Many rabbits hate having their nails done. Because Flemish Giant rabbits are so big and powerful, you might want to wrap yours in a towel before attempting the clip. You might also want to enlist a friend to help. Even better, schedule regular clipping with your vet.

In general, rabbits — even giant rabbits — can be delicate. Their bones can break easily and unexpectedly. Also, nervous bunnies can injure themselves trying to escape what they perceive to be a danger.

You might think that because of their size, giant rabbits are less delicate than smaller bunnies. That’s not necessarily so. Their spines, in particular, can be prone to fractures, as can their hind legs. Their size and weight can also make handling them awkwardly.

Also, as we mentioned, the giant Flemish rabbit can do some real damage with its teeth, claws, and hind legs.

Most Flemish Giant rabbits enjoy interacting with their people. They like strokes and cuddles, too. But avoid picking giant rabbits up unless it’s necessary to do so.

You might have guessed that giant rabbits need a big enclosure. It’s true!

Flemish Giants can live happily indoors or out. But the key to that happy living is having enough space.

Every rabbit needs at the minimum:

And for a Flemish Giant, you’ll need the most massive hutch you can buy.

Also, as we mentioned, due to the size of a Flemish giant, the summer heat can be a big problem. So place your hutch so that it’s out of direct sunlight.

Of course, a hutch is not enough.

Your Flemish Giant will also need a giant exercise space. Invest in an extra-large run — or more than one. Better yet, fence off a large section of your garden for supervised giant-sized fun.

And if your Big Bunny’s play area is inside, make sure to rabbit-proof any area where your rabbit will be.

A Giant Rabbit is a Giant Responsibility

A big bunny can be big fun. But it’s important to consider both your needs and your rabbit’s needs, to make sure that a Flemish Giant rabbit is a good “fit” for your household.

Do you have a Flemish Giant? Or maybe you’d like to share some advice for potential FGR owners. Drop us a note in the comments!