Introducing the Tit Family of Birds

Tits are easily recognisable. Small and agile, they can extract food from the feeders with ease. You will notice the difference when comparing to other garden birds. They often arrive at the feeders in small groups and may form an impatient queue. A bird feeding station will provide many feeders and the chance to offer many tasty treats so this may prevent some squabbling.

Great Tits dominate the other tits. When you see them up close, you gain a greater idea of size and characteristics. Generally, tits have a lifespan of two or three years but they can live for longer.

They are vulnerable at feeders and the risk comes from cats and birds of prey such as Sparrowhawks. There is a delicate balance in nature. A Sparrowhawk may be evidence that the local bird population is doing well.

When you learn more about the birds in your garden, it improves your affinity with them. 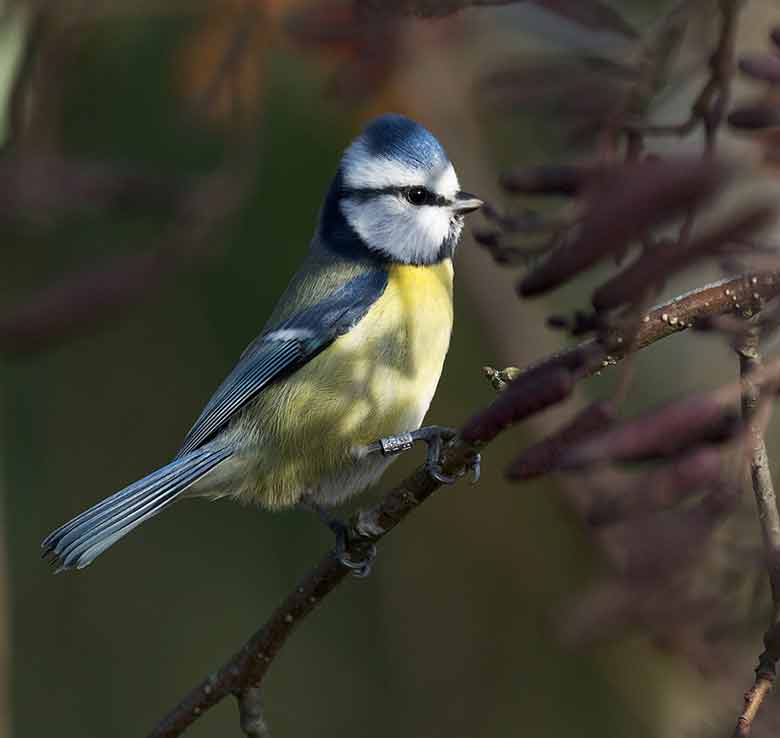 The Blue Tit is common in Britain and one of the first birds to visit the bird table. Its preferred habitat is broad-leaved woodlands. These are highly adaptive birds and a favourite visitor to gardens. They are only 12cm in length and weigh a mere 11 grams. Lifespan is generally 2-3 years but they can survive for longer. In fact, the longest recorded lifespan for a Blue Tit is a staggering 21-years.

Blue Tits are easily distinguishable by its azure blue crown. The forehead is white and underneath, the feathers are a sulphur colour. The shade of these feathers denotes how many caterpillars the birds have eaten. It can be difficult to differentiate between the sexes but the male bird tends to have brighter plumage and the blue on the head is more visible.

Blue Tits are present all year round. If you have Blue Tits visiting your feeders, know that they were probably born nearby. They rarely move far from their place of birth. During the breeding season, Blue Tits lay between 7 and 13 eggs. They may lay repeat clutches but this usually happens if they lose the first brood.

Baby Blue Tits are very demanding. On average, they need to feed on 100 caterpillars a day each. The adult birds have to work extremely hard to sustain this feeding frenzy. They also remove the faecal sacs taking them far away from the nest. This keeps the nest clean but helps to protect the nest site. Young birds are at great risk after fledging so the food you supply is beneficial.

While they often nest in small holes in trees, they will happily adapt to a bird box in the garden. They start breeding in late April so it is the perfect time to encourage these pretty birds and to provide a suitable breeding box.

They often form mixed flocks with Great Tits and help to control garden pests so can be considered the gardener’s friend. They eat aphids, leaf miner grubs and some moth grubs. The numbers of Blue Tits are increasing. This shows how invaluable it is to provide regular food. Blue Tits love fat balls and seeds. Insects also form a large part of their diet. 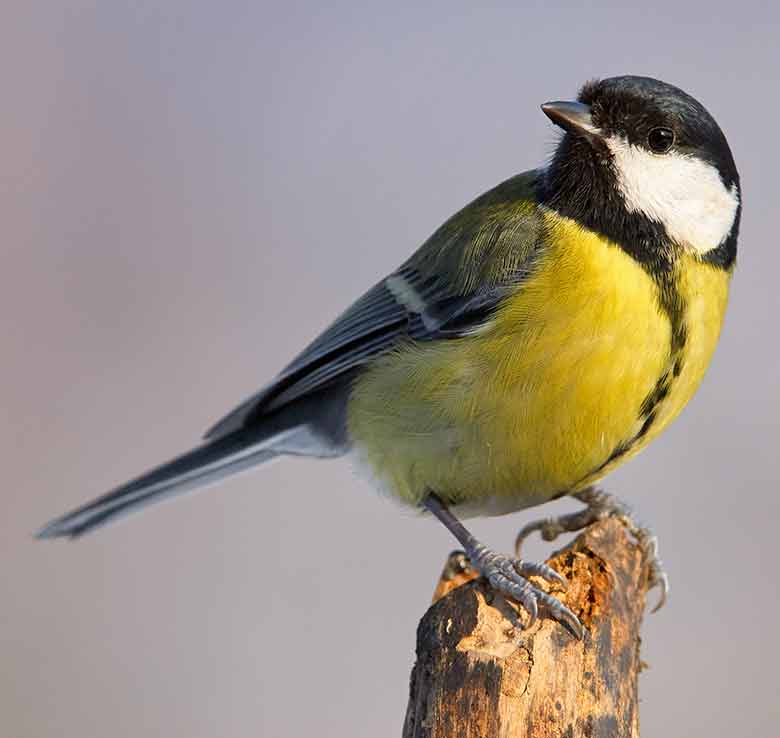 The Great Tit is the largest member of the tit family at 12.5-14cm in length. This bird is quite distinctive. They have a lemon-yellow breast, a blue/black crown, black head, neck and throat. Notice its white cheeks. The feathers on the back are olive-green and you will see a blue-grey tinge to the wings. The males tend to have a more intense colouring than the females.

Great tits are adaptive and fascinating birds and are regular visitors to the bird table. Sit back and watch their acrobatic antics.

They eat a lot of caterpillars and seeds and berries but hang out fat balls or suet pellets and they will visit regularly. You may even see them cheekily wiping the remnants of fat from their beaks on a nearby branch.

Great Tits usually breed in a tree cavity or wall but they will happily adapt to a bird box. They tend to breed in April and May so will be busy looking for a suitable place to nest. They lay between 5 and 12 eggs. The eggs hatch after two weeks and the young birds will fledge within a three-week period.

Great Tits are well-known mimics and have a wide repertoire of bird songs and sounds. They have learned that by using their alarm call, it scares other birds from the feeders. This gives them the opportunity to feed in peace. They live for approximately 3 years but the oldest Great Tit survived for 13 years. 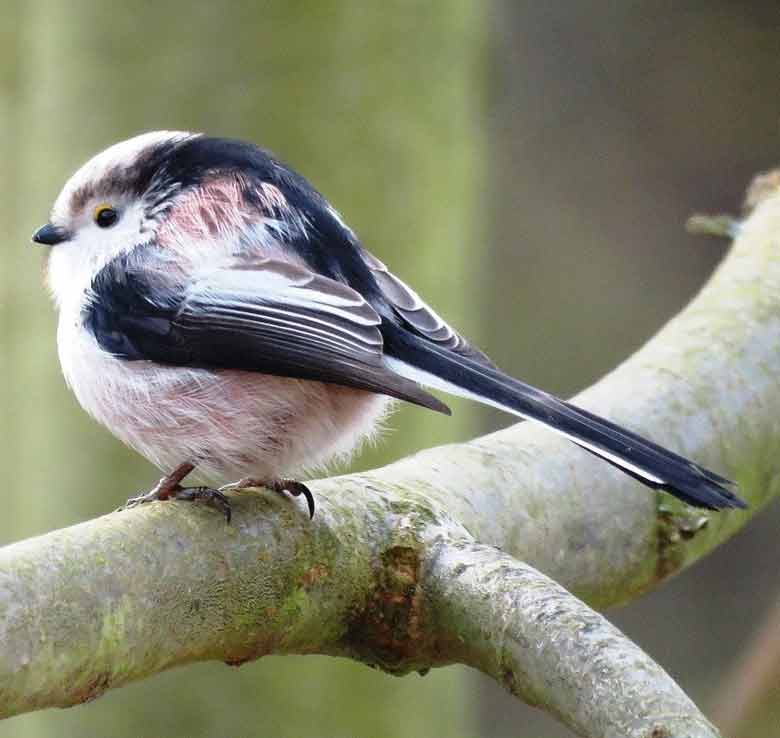 One of the favourite tits to visit British gardens is the delicate Long-Tailed Tit. These are not really part of the tit family despite the name and they relate to several species in Asia. These are noisy, sociable birds and are regulars to the garden. They appear in seemingly-hyperactive flocks as they rarely remain still.

Active feeders, they flit from branch to branch searching for insects and spiders. It is easy to entice them with crushed peanuts, mixed birdseed and suet. You will often see them in flocks of 6-20 birds during the winter months.

It is impossible to not love Long-Tailed Tits. They are incredibly pretty and delicate at just 14cm in length including their long tail. They weigh approximately 9 grams and live for 2 years. With the long black and white tail, these tits are easily distinguishable. They have a pale pink underbelly, and a black, white and pink back.

They are at most risk during the cold winter months. At night, they huddle together to keep warm as they lose energy very quickly due to their small size. During the spring, the groups break up and they go off to breed. This occurs from February onwards and they build a mossy domed nest in the fork of a tree or, in a bush.

Nests are well-camouflaged and they need to be. The birds use lichen and cobwebs and use approximately 1500-feathers to line the nest. They lay eight to twelve eggs which usually hatch after three weeks. Long-Tailed Tits will often have helpers to raise their young. These are usually the birds which have lost their own brood.

The birds fledge quickly in just two weeks. This is important because the nests are often raided by sharp-eyed crows and magpies. This happens even though nest sites are well-camouflaged. 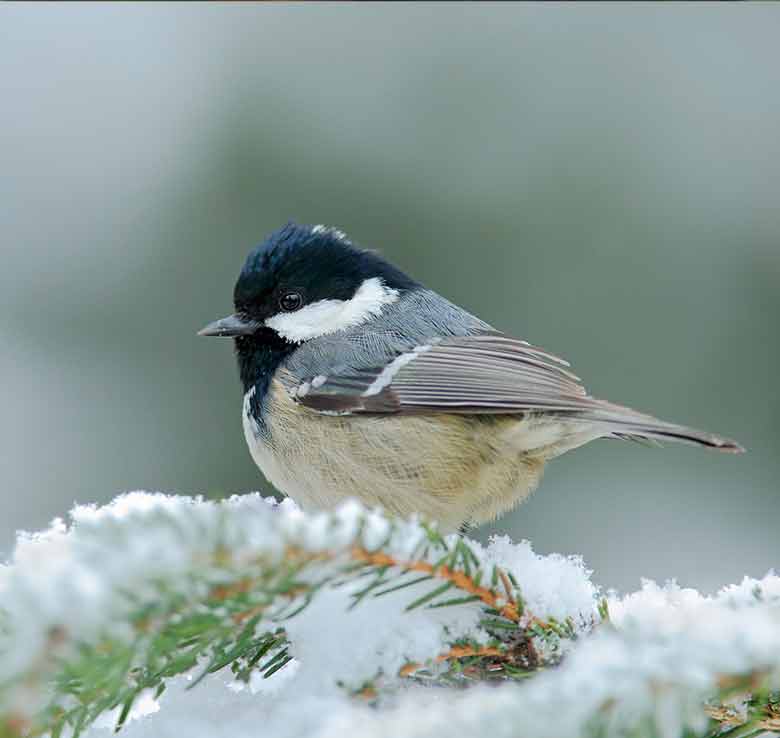 The Coal Tit is not as well known as the others but they do still frequent gardens. They are easily mistaken for Marsh or Willow Tits and are the smallest of the tits at 10-11 cm in length.

The colouring of their feathers is less vivid than the Great Tit. The underneath feathers are an off-white. The head, throat and neck feathers are a blue-back. They have visible white cheeks but for ease of identification, look out for the white patch on the back of the head.

Coal Tits nest in holes in the ground often choosing mice burrows. Or they may seek out a tree stump, find a crevice in a wall or, if needed, will take over other birds’ nests. Predators include foxes and cats.

They start breeding in May but usually produce one clutch a year and lay between 7 and 11 eggs. The eggs hatch in two weeks and the young birds fledge two weeks later.

Coal Tits enjoy a diet of suet, sunflower seed hearts. They may hide their food creating a larder for when times are hard. However, they often forget where they have stashed their food. If you see seeds germinating in strange places, this may be the work of the Coal Tit.

The savvy Great Tit capitalises on the Coal Tit’s stash of food and raids it. Coal Tits often struggle in winter so having a regular food supply helps to sustain them. Their lifespan is 2-years on average. 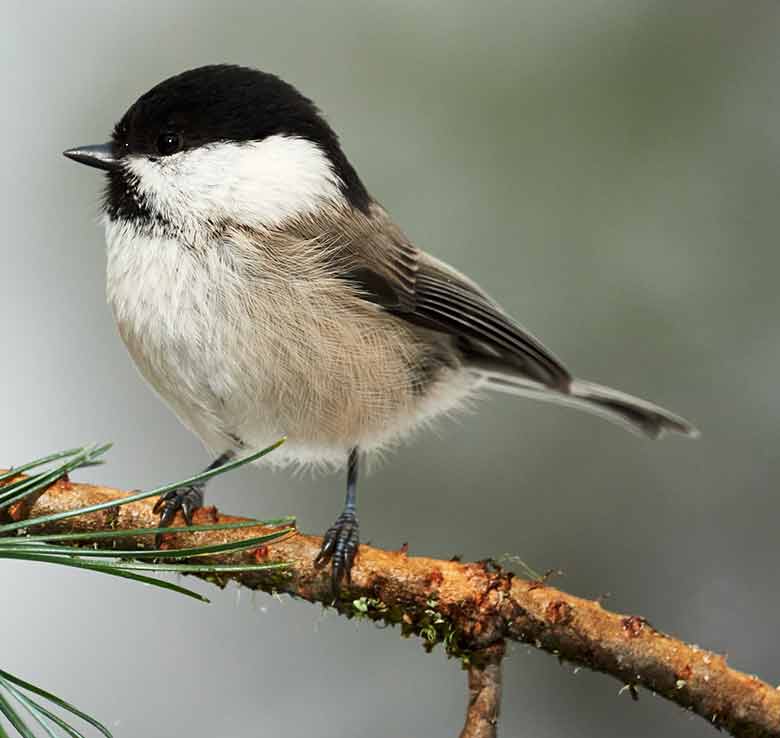 Willow Tits are stocky birds. In size, they are between the Blue Tits and Great Tits. They have a black cap and a matching bib, white cheeks, but the feathers underneath tend to be a buff grey. They are often confused with Marsh Tits, but learn the song and it will be easier to tell the difference.

They nest lower down than many tits preferring rotting deadwood. The size of the entrance hole is important. Willow Tit’s like the hole to be approximately 2-3 inches in diameter. They prefer wetter areas and use alder, birch and willow trees.

They will make use of a garden feeder especially if their chosen food of insects and berries is scarce. The female lays a clutch of six to eight eggs in April. According to the RSPB, Willow Tits are in decline.

There are three main risks:

The lifespan of the Willow Tit is approximately 3 years. 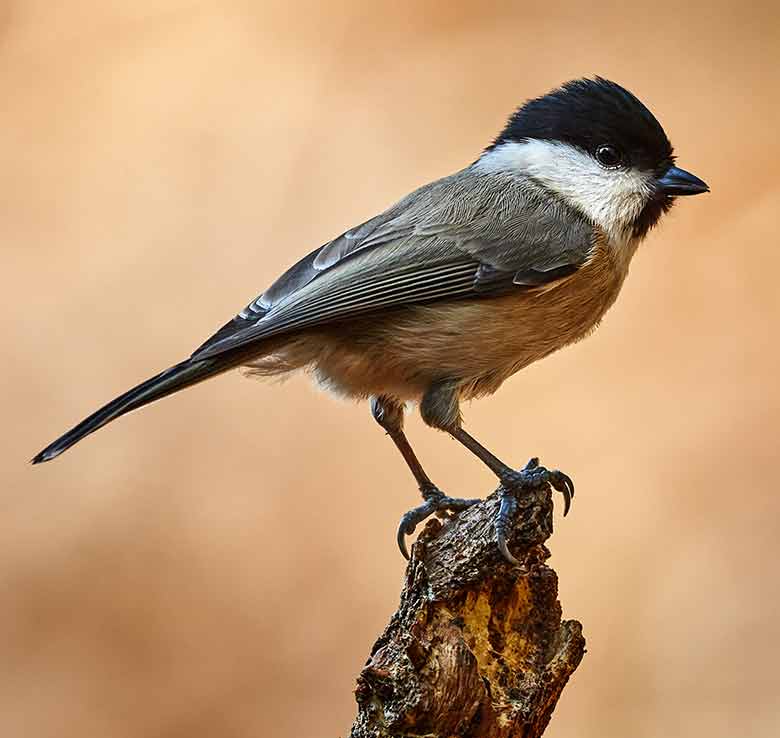 The Marsh Tit is very like the Willow Tit. In fact, ornithologists did not realise they were a different species at first. They have a shiny black cap and black bib and the feathers underneath are pale. Marsh Tits prefer broadleaf woodlands, parks and gardens and are less likely to live in the damp areas usually chosen by the Willow Tit.

They live on insects, berries and seeds and, similar to the Coal Tit, may try to store food for times of need. They nest in holes and trees, but do not excavate their own nest holes. They lay seven to nine eggs. If you live close to a woodland area, you can attract these birds into your garden. Display fat balls, sunflower seeds or crushed peanuts.

Not sure if you have Willow Tits or Marsh Tits? Listen to the bird song. If you hear a sneezing sound, you have a Marsh Tit. 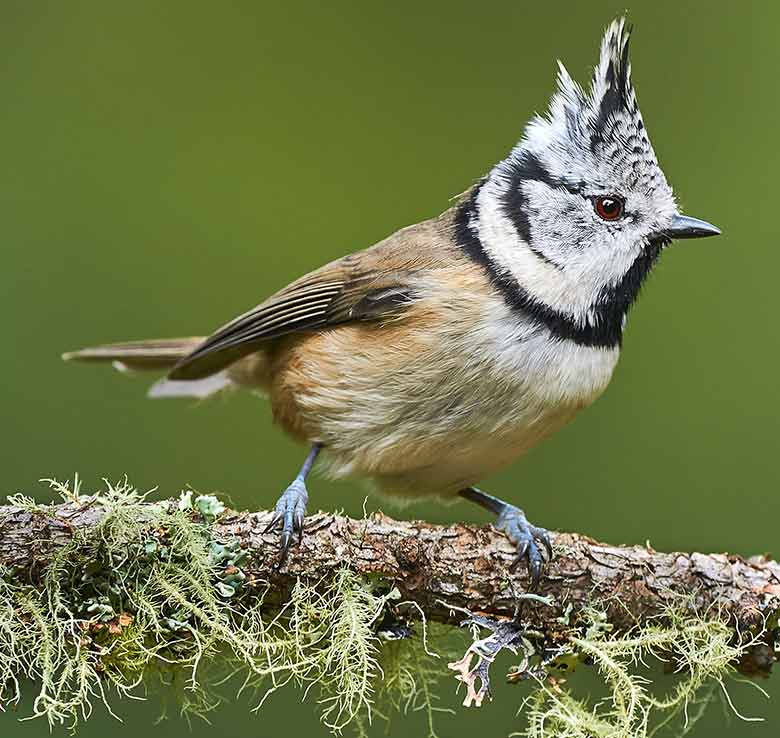 If you live in Scotland and close to any coniferous forests, you may well see the beautiful Crested Tit. It is a distinctive bird, and easily recognisable with its peaked tuft on the top of its head. With a short thin beak, the feathers on the head are black and white and on the wings, they are brown and black. Underneath, the feathers are a buff colour.

They are 11.5 cm in length and weigh 10-13 grams. The population has grown in recent years due to the increase of pine plantations. They do prefer ancient plantations but are adapting. Crested Tits feed on invertebrates and pine seeds and will also feed on moth larvae and caterpillars.

The population of Crested Tits is restricted to Scotland. They will visit bird tables in nearby gardens and are partial to suet-based foods. They especially enjoy those with mealworms or insects.

Encouraging tits to the garden

To encourage the tit family of birds into your garden, put out quality food regularly. All birds become used to this regular supply and will rely on it. In addition to bird food, try to make the garden as natural as possible. Plant with nature in mind.

Your garden, whether large or small, can benefit nature. Aim to create an eco-environment which means encouraging insects, mammals and birds. Create a natural pond, an insect home or a log pile. Try adding some of these flowers to your borders or grow in pots. Try Ox-eye daisy, harebells, red clover, chamomile, wild thyme or bulbous buttercup.

Do you have any questions about the tit family of birds? Do contact us and we will be happy to help.

As you learn more about these birds, it becomes easier to create the right habitat for them. Remember that all garden birds are vulnerable at key times of the year. You can help to sustain their population. Create the right environment for them and the birds will come. 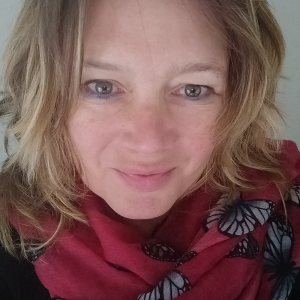