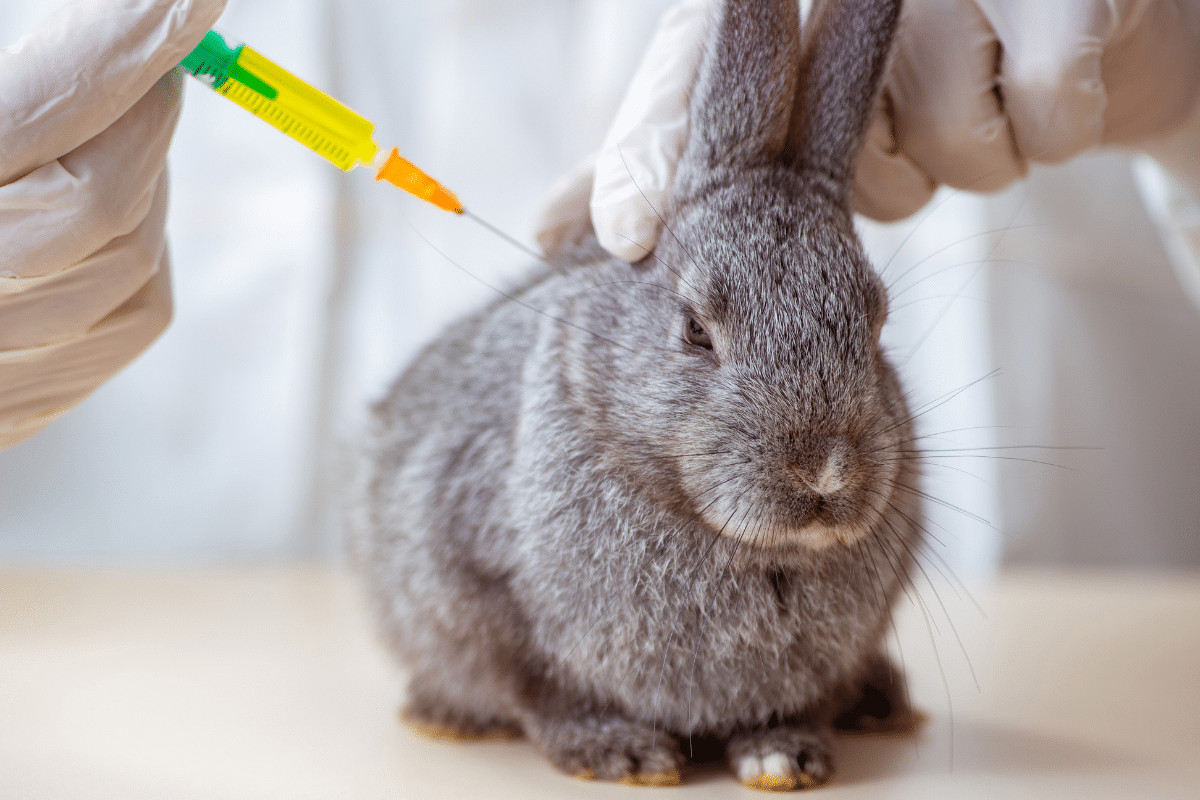 Viral Haemorrhagic Disease (VHD) in rabbits is a highly infectious disease with a 50 to 100 per cent mortality rate. There is no treatment, but there is a vaccine to protect against the two major VHD variants.

Viral Haemorrhagic Disease, or VHD, is a serious and often fatal disease that affects both wild and pet rabbits. It spreads quickly and has a mortality rate of between 50 and 100 percent.

On top of that, the first symptom is often sudden death.

The good news is, you can vaccinate your bunnies against both variants (RHD-1 and RHD-2).

What is VHD Disease?

VHD is a rabbit disease that affects both domestic and wild rabbits. At this time it does not affect other species.

RHD-1 is fast-acting. The first sign of a problem is often sudden death. If other symptoms do occur, death will usually occur in 48 hours or less.

RHD-2, a new strain, acts more slowly. An infected rabbit can live up to nine days after symptoms begin. The outcome and mortality rates, however, are similar.

Both variants kill by causing liver failure or internal bleeding due to the blood’s inability to clot.

How Does VHD Spread?

The virus that causes VHD (RHD) resides in a rabbit’s bodily fluids, including:

The virus is mainly transmitted through direct contact with infected fluids. It can last up to 100 days at room temperature, and even longer in colder temperatures. It is also resistant to freezing.

Even if you don’t knowingly make contact with bodily fluids, it’s possible for particles to stick to rabbits’ fur or feet, and to travel to other rabbits. Although at this time, people can’t contract VHD, it is possible for us to transfer it unknowingly on our hands, shoes, and clothing.

Other animals can also unwittingly transfer the virus. It’s also possible for a rabbit to become infected by breathing in the virus.

Rabbits rarely survive RHD, but the ones that do can shed the virus for up to six weeks after the infection has passed.

RHD can also spread through rabbit products like meat and pelts. Cages, toys, bedding, food dishes, water bottles, and other supplies can also harbor VHD for up to four months.

Where Did VHD Come From?

Viral Haemorrhagic Disease originated in Europe in the 1970s. It came to popular attention, however, following an outbreak in China in 1984, which killed 14 million domestic rabbits in the space of nine months.

Since then, the virus that causes VHD has spread to over 40 countries, and has become endemic in the wild rabbit populations of some countries.

The new virus variant, RHV-2, appeared in Europe in 2010, and has similarly spread to different parts of the world. In some places, RHV-2 is the dominant variant.

What are the symptoms of VHD in rabbits?

Rabbit Haemorrhagic Disease (RHD) has an incredibly fast onset. Death often occurs within 12 to 48 hours of exposure. In this time, you may not even notice symptoms, as it’s primarily internal organs that are affected.

Viral Haemorrhagic Disease (VHD) in rabbits is a highly infectious disease with a 50 to 100 per cent mortality rate. There is no treatment, but there is a vaccine. Click To Tweet

Often the first symptom is sudden death, especially if you see blood around your rabbit’s nose or mouth. Any sudden death is suspicious, but if you find more than one of your rabbits has died suddenly, it’s important to inform your vet.

So if one of your rabbits dies unexpectedly, it’s important to watch your other rabbits for symptoms and take precautions not to spread any potential disease yourself.

Infected rabbits may not die right away, however. The following symptoms may indicate VHD, so if you see them, it’s important to contact your vet immediately.

Pay special attention to lethargy and loss of appetite, as these are symptoms of numerous serious rabbit illnesses, including GI Stasis.

How Does a Vet Diagnose VHD?

Your vet may suspect VHD from your rabbit’s symptoms. The only way that a diagnosis can be confirmed, however, is through an autopsy and examination of the internal organs.

Is There a Treatment for VHD?

Because this disease is so serious and so painful, many vets will recommend putting a rabbit with VHD to sleep.

How Can I Prevent RHD?

Rabbit Haemorrhagic Disease is spread through contact — not just contact with people, but also contact with birds, insects, rodents, wild rabbits, and other animals. Even if an animal can’t be affected by VHD, it can still spread the virus.

The first and best option is to vaccinate your rabbits. In addition — not instead of — vaccination, there are several measures you can take at home to protect your rabbits from VHD.

Your vet can give you more information about the vaccine against RHD-1, RHD-2, Myxomatosis, and any other vaccinations your rabbit may need.

Fortify your rabbit’s enclosure to keep other animals out.

How? We’re glad you asked that.

First, make sure the hutch is raised off the ground. If your hutch connects to a run, put your rabbits back inside the hutch in the evening, and close off access to the run.

Also, dig-proof your run. There are a few ways to do this.

Lay paving stones or concrete on both sides of the walls of your run. Alternately, create a canopy of wire mesh along the perimeter on both sides. You could also dig wire into the ground around the sides of your hutch. Dig it ten to twelve inches deep.

Make certain that any wire used in your hutch’s construction and run is chew-proof, as well.

And take steps to rodent-proof your rabbit enclosure, such as:

In addition, never leave your rabbits unattended if there’s a chance they may encounter other animals.

It sounds simple, but washing your hands before and after handling your rabbits can help to stop the transfer of viruses, germs, and bacteria in its tracks.

Also take care not to transfer viruses via your clothes or shoes. If you’ve been out walking where wild rabbits live, change your clothes and shoes before visiting your own rabbits.

Remove your rabbit’s access to grass and hay that may have become contaminated by other animals.

Avoid using a second-hand hutch or giving your rabbits toys, blankets, and so forth, which have belonged to other rabbits.

It’s always tempting to recycle perfectly good objects. But it’s just not worth the risk of transferring VHD or another disease to your rabbits.

If one of your rabbits has died from VHD, dispose of their belongings, including their hutch.

There are several substances that can kill VHD on surfaces. These include:

You can find supplemental information about veterinary disinfectants here.

Where Does VHD Exist?

VHD originated in Europe. However, it has spread to many other places around the world, including the United States, Asia, Australia, and the United Kingdom. At this time, there have been confirmed cases of both RHD-1 and RHD-2 in more than 40 countries around the world.

Insects, particularly flies, are drawn to food, urine, and faeces. They can pick up particles of VHD from infected rabbits and transport it to other rabbits.

Flies can also cause flystrike, which is another very serious, very deadly, and very fast-acting condition.

If you notice flies, maggots, or other insects in your hutch, especially if you see them on your rabbit, you need to get your rabbit to the vet as quickly as possible.

In addition to flies, fleas can also spread VHD. So consult with your vet regarding how best to protect your rabbits from fleas.

And if mosquitoes or other small insects are a problem in your area, consider fortifying your hutch and run with mosquito netting.

Can Humans Catch VHD From Rabbits?

At this time, no.

Rabbit Haemorrhagic Disease (RHD) is a lagovirus. That is, it affects lagomorphs, which include rabbits, hares, and pikas. Of these, VHD only affects rabbits.

Can Other Pets Catch VHD From Rabbits?

At this time, no.

However, like people, other animals can carry the virus and transmit it to other rabbits.

It’s rare that a rabbit will survive RHD2 or RHD1. Both are equally deadly. There are exceptions, but those exceptions are few and far between.

What’s the Difference Between RHDV and RHDV2?

Although both RHDV and RHDV2 are variants of the same virus, the disease that each causes is slightly different. There are other differences as well.

RHDV kills faster. Infected rabbits often die within 12 to 48 hours of exposure. RHDV2, on the other hand, takes up to nine days to kill an infected rabbit. Both have a mortality rate of between 50 and 100 percent, however.

RHDV2 has the ability to infect North American wild rabbits, including cottontail rabbits and hares. RHDV doesn’t have this ability.

RHDV2 has a greater ability to spread very quickly through wild rabbit populations than RHDV.

Protect Your Rabbits from VHD

Rabbit Haemorrhagic Disease (RHD) is scary, no doubt. This disease is painful, kills quickly, and spreads like wildfire.

But you can protect your rabbits. Ask your vet about the vaccine against VHD-1 and VHD-2. A vaccine is the fastest, easiest, and most effective way to keep your rabbits healthy.

1 thought on “Your pet Rabbit and Viral Haemorrhagic Disease (VHD)”