How Big do Rabbits Get? | Meet the Worlds Biggest and Smallest Bunnies! 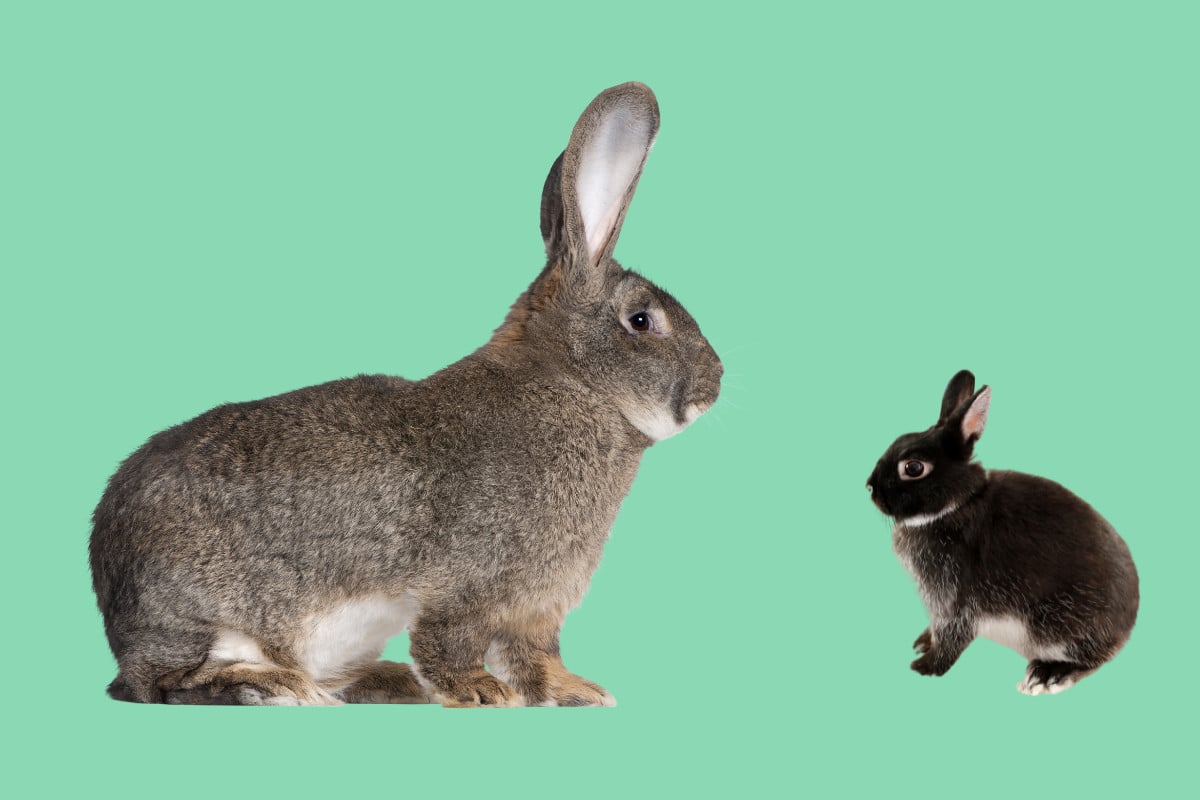 How big do rabbits get? That’s like asking how big cars get. Some breeds can grow very large indeed, while other rabbit breeds remain quite small. And within breeds, there are always larger and smaller individuals.

Everyone’s first question, of course, is who are the largest and smallest rabbits in the world today? Have a look!

The Largest Rabbit on Record

Have you heard about Darius the giant rabbit? In 2010, the Guinness Book of World Records recognised Darius, a Continental Giant Rabbit, as the World’s Largest Rabbit. Darius measures 1.3 metres (about four feet three inches) from nose to tail. That’s about the size of an eight year old child, which is a lot of rabbit!

In April of 2021, Darius was stolen from his owners in Central England, though he is still presumed to be alive. In his stead, many people consider his son Jeff and his daughter Enya to be contenders for the world’s largest rabbits.

The Smallest Rabbits on Record

Columbia Basin Pygmy Rabbits weigh an average of .08 to 1 pound, and measure 22.8 to 29 centimetres (between nine and eleven inches) from nose to tail.

As for domestic rabbits, the Netherland Dwarf is considered the smallest, though their average weight is about twice that of the Columbia Basin Pygmy.

There does not appear to be an individual record holder for world’s smallest rabbit, either amongst pet rabbits or amongst wild rabbits.

The Largest and Smallest Rabbit Breeds

Rabbits come in an amazing array of shapes and sizes, from a handful of giant rabbit breeds to tiny “teacup” bunnies.

The Largest Breeds of Rabbits

Flemish Giants are the largest rabbit breed in the world, and the rabbit breed from which other giant breeds are descended. Flemish Giants date back to the 1500s, though they weren’t considered a breed until around 1860, and the breed standards weren’t written down until 1883.

Most Flemish Giants weigh between 6.8 kilograms (15 pounds) and 10 kilograms (22 pounds). These big bunnies are gentle giants, renowned for their docile and friendly nature.

The Flemish Giant Rabbit Breed is recognised by the American Rabbit Breeders Association .

The Continental Giant Rabbit (also known as the German Giant) is descended from Flemish Giant Rabbits.

The largest Continental Giant currently on record is Darius, who, at the time of his record, weighed 24 kilograms (53 pounds).

This breed was first recognised in 1893. The Continental Giant Rabbit breed is recognised by the British Rabbit Council, but not by the American Rabbit Breeders Association.

Other large rabbit breeds include:

To name a few.

There are two types of small rabbit breeds: those that are naturally small, and rabbit breeds that have been “bred down to size.”

The smallest wild rabbit breed in the world are the Columbia Basin Pygmy Rabbit. There are other pygmy breeds, such as the Idaho Pygmy Rabbit. All of these breeds live in the north central and northwestern United States.

No matter how large or small your rabbit is, they all need the same amount of living space proportionately. That is, everybunny needs an enclosure that is big enough for him to stand up, hop around and lie down, without touching the… Click To Tweet

As for the domestic rabbit, Netherland Dwarfs are the smallest breed. Netherland Dwarfs typically weigh 0.9 to 1.13 kilograms (between two and 2.5 pounds). That’s about half the size of most other dwarf breeds.

The small, or dwarf, domestic breeds are more recent in origin. The Netherland Dwarf and Mini Lop date to the middle of the twentieth century. The Teddy Dwarf and Teddy Lop are twenty-first century bunnies, originating in 2004 and 2009, respectively.

How Big are Rabbits When They’re Born?

How big are baby rabbits? That depends on Mom and Pop.

The kits (or “kittens”) of giant breeds can weigh around 56 grams (two ounces), while baby rabbits from dwarf breeds can weigh half that, or about the same as a pencil. The kits of average sized rabbits weigh, as you might expect, somewhere between these two extremes.

At What Age do Rabbits Stop Growing?

It takes many rabbit breeds between a year and eighteen months to reach their adult size, though they reach sexual maturity between three and six months of age.

What’s the Average Size for a Rabbit?

We’ve seen the extremes. The smallest rabbits can measure around nine inches in length and weigh less than a pound, while the largest giant breed rabbit on record is over four feet long, and weighed 53 pounds.

The average domestic rabbit, however, weighs around 2.72 kilograms (six pounds).

How do I Know How Big My Rabbit will Be?

Looking at the parents of your bunny can give you a good idea of how large your rabbit will be. If you know that your rabbit is descended from a large or giant breed, then there’s a good chance you’ll have a big bunny.

You can also make a reasonable guess based on your rabbit’s age. For example:

Are Males Bigger Than Females?

Not necessarily. This is one of the things that makes it so notoriously difficult to determine the sex of a rabbit. Male rabbits and female rabbits of the same breed are often very similar in size.

As with many animals, smaller rabbit breeds to tend to have longer lifespans. The average lifespan for giant breed rabbits is four to six years, while medium sized and smaller rabbits often live twice as long.

That really depends on who you are as a pet owner.

Giant rabbits can make great pets. On the average, giant breeds are calm and friendly, and get on well with their humans and other pets. At the same time, they have a shorter lifespan–just three to five years. And, due to their size, giant breeds need more food, more living space, and require more cleanup.

Small breed rabbits don’t require as much space or food, and some, like the Mini Lop have an easygoing personality.

Other small breeds, however, like the Netherland Dwarf Rabbit, are higher strung and prone to bite and scratch. Also, many “dwarf” and “teacup” pet breeds are extremely delicate, with fragile bones.

For most rabbit owners, average sized rabbits like Dutch Rabbits are the “happy medium” in terms of lifespan, temperament, health, and care needs.

No matter how large or small your rabbit is, they all need the same amount of living space proportionately. That is, everybunny needs an enclosure that is:

And these are minimums for living space only, that is, your rabbit’s house or hutch. To keep your bunnies healthy and happy, you’ll also need to provide adequate exercise space in the form of a spacious run. (Many of our hutches and runs work together to provide 24/7 living and exercise space!)

The larger your rabbit, the more space you’ll need.

Big or Small, We Love Them All

Rabbits are amazing animals that come in an astounding variety of shapes and sizes, from the mighty Flemish Giant to the adorable Columbia Basin Pygmy and the feisty Netherland Dwarf.

Rabbits of any size can make excellent pets, provided the owner is prepared for the cost and work involved in their upkeep.

What size rabbit do you have? Have you ever owned a giant bunny or a mighty mini? We’d love to hear about your experiences!