Why Is My Cat Sleeping A lot? 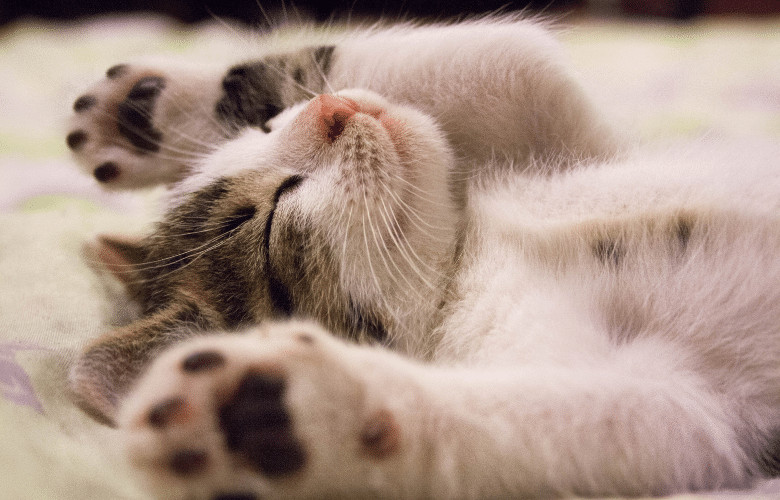 Do you worry about how much your cat sleeps? Maybe you even suspect ‘nar-cat-lepsy’, the feline version of the relatively rare sleeping disorder that affects around 30,000 people in the UK. Well, while it may be cause for concern if you’re a first-time paw-rent, the good news is cats sleep a lot. In fact, the only thing they catch more than mice is ZZZs!

But What Is A Lot?

To answer the question of why your cat is sleeping a lot, we must look at cats’ sleeping habits in general. Understanding this will help you figure out if your pet is sleeping more than other cats, or is, in fact, doing what its programmed to do.

It may come as a bit of a surprise to find out that healthy adult cats can nap for up to 16 hours a day on average, while kittens and older cats spend between 20 and 24 hours asleep. And it’s got nothing to do with being lazy.

You see, thanks to their ancestors that stalked and chased their food around, cats are wired to conserve energy in between hunting and eating. So although your kitty no longer roams the African savannah, it’s still programmed to hunt, eat, sleep and repeat.

But there is a lot more to your sleeping cat than you might think. Carry on reading to find out a couple of fascinating facts about your cat’s sleeping patterns.

7 Interesting Facts About Sleep and Your Cat

This is why we’ve put together 7 of the most interesting facts about cats doing what they do best… catching a lot of ZZZs.

1. Sleeping vs a Cat Nap

Unlike a human’s sleep pattern that lasts for approximately 8 hours (or more, if you’re lucky), a cat can take a quick power nap to recharge. When your feline has pressed the pause button on its busy schedule, it will still respond to its name being called or the chirp of the pesky robin outdoors.

2. Cats Can Sleep Sitting Up

Although cats can spend a large portion of their day sleeping, it’s important to keep in mind that about three-quarters of the time they’re only half asleep. This means they’re able to get the rest they need, while still being aware of their surroundings. You’ll know your cat is in this dozing stage if it falls asleep while sitting up, or it reacts to noises or the smell of dinner.

Another reason cats tend to sleep so much is to conserve their energy. In the wild, cats need to recharge to hunt. And while your kitty doesn’t need to physically hunt for its next meal, it is still programmed to behave the same way its ancestors did. A cat’s sleeping habits will also change according to the weather. During the cold, dark and gloomy winter months you will notice your cat napping more.

Just like human babies, kittens need sleep to grow. When your furry little feline is fast asleep, its body is working hard to ensure healthy brain and central nervous system development. Frequent napping also helps strengthen and tone its muscles and builds its immune system. Insufficient sleep for a kitten may affect its mood and even make it sick.

5. Cats Sleep If They Are Bored

If your cat isn’t getting enough mental stimulation, boredom can set in. This usually causes sluggishness and depression, which in turn leads to fatigue and more sleep. Your cat needs to have plenty of activity during its waking hours. This includes playtime with you, as well as scratch posts, tunnels and other fun goodies to keep it stimulated.

Now here’s something you may not have known. Even though cats’ sleep patterns are different from ours, they still go through various sleep stages, including Rapid Eye Movement or REM. It is in this dream state that you may notice your cat twitching, with its eyes half-open. Like something out of a horror movie, its eyes may also dart side to side.

7. Did You Know That Cats Snore?

Yup, cats snore exactly the same way humans do. But some cats are more prone to it than others. For example, brachycephalic or flat-faced cat breeds, including Himalayans, Persians, Burmese and exotic shorthairs have narrow passageways to and from the throat and nose, causing them to snore a lot more than other breeds. Cats that are obese are also more likely to snore than their slimmer counterparts.

When Too Much Sleeping Is Cause For Concern

Cats sleep so much, it is often difficult to tell whether they are sleeping too much. However, there are some things to look out for.

More than 20 Hours of Sleep a Day

If you notice your cat is getting in more than 20 hours of sleep a day or you’ve seen changes in its behaviour or health, it is a good idea to book an appointment with your vet to discuss any concerns.

Your Cat Wants to Sleep in the Morning and at Night

Contrary to popular belief, cats aren’t nocturnal but are actually crepuscular, which means they are most active at dawn and at dusk. If your cat’s activity levels dip at these times, there could be an underlying health problem. Common causes for the change in a cat’s normal sleep habits can include a lack of vitamins and minerals, an unhealthy diet, depression or its age.

Your Cat is Lethargic

Spending time with your cat allows you to understand its behaviour and know when something’s not quite right. If your usually sprightly kitty appears tired or lethargic for no specific reason, it’s often a sign of an underlying serious medical condition. It’s best to get your cat to the vet for a checkup as soon as possible.

What’s important to remember, however, is that all homes and cats are different. Some cats might spend all their time sleeping while their owners are at work, while others find a sunny spot outdoors to catch a quick cat nap. It’s only if your feline starts having severe sleep problems that you need to worry.

How much does your cat sleep? Have you got a funny story or a photo of it doing something hilarious while snoozing? We’d love to hear about it, or see a pic. Just pop it in the comments below.