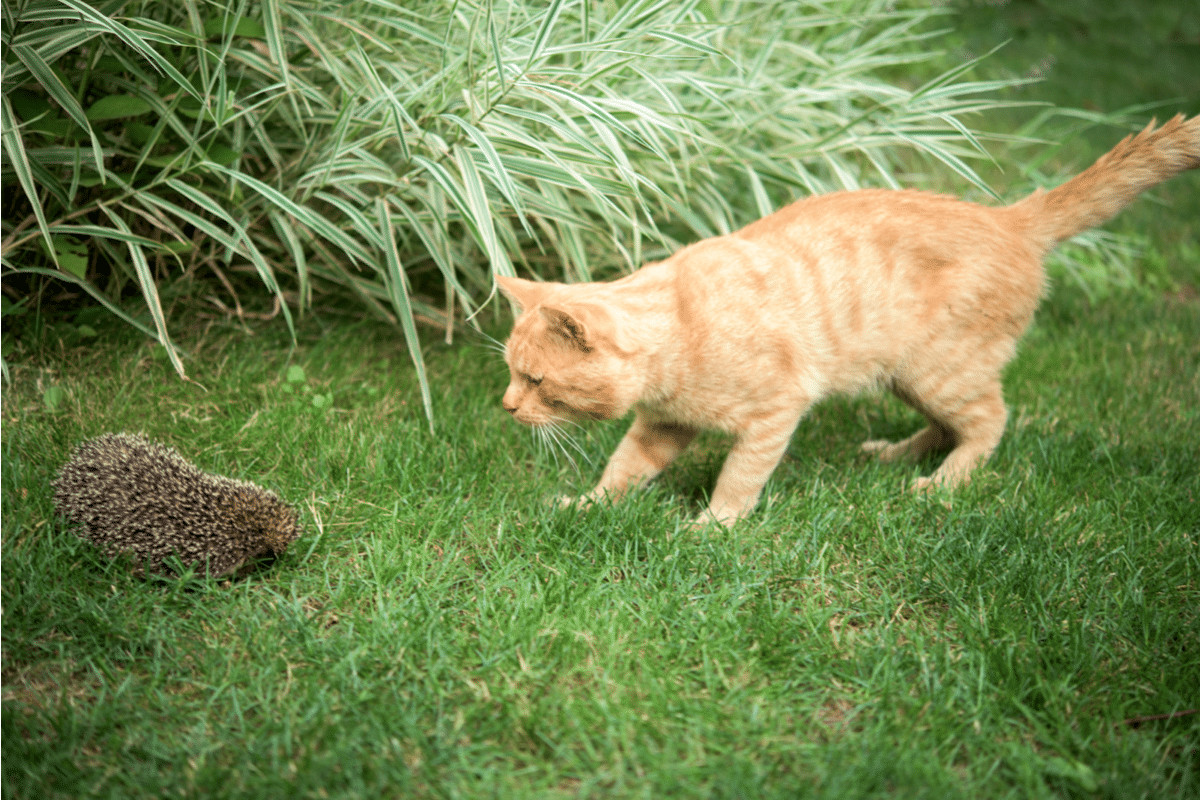 Hedgehogs in the UK are in trouble. Their numbers are rapidly declining, and as responsible wildlife gardeners, we need to do everything we can to help them when they are on our patch. But what if your love of animals includes a love of cats? Will your cat attack visiting hedgehogs? Can you make a hedgehog friendly garden if you have cats? Let’s find out.

Hedgehogs in the UK face many challenges, but thankfully cats aren’t really one of them.

Hedgehogs in the UK face many threats, but thankfully cats aren't really one of them. Click To Tweet

Cats, especially kittens, will certainly investigate hedgehogs – after all cats are known for their curiosity. But investigation is where it generally ends. Cats are bright enough to realise there is no pain-free way through all those spines. So they will typically leave hedgehogs alone.

It takes strong jaws and paws to penetrate the defences of a hedgehog. Although foxes will occasionally take a hedgehog the only UK animal properly equipped to prey on hedgehogs is the badger.

Cats are a significant threat to birds in our gardens and many small mammals. But they don’t pose much threat to hedgehogs. Hedgehogs are very well defended, and after an initial investigation, cats generally leave them alone. And your cat won’t catch fleas off hedgehogs either.

There is some anecdotal evidence of cats attacking young or sick hogs. But in the overall scale of threats to our hedgehogs, cats don’t really figure.

So you shouldn’t let the fact that you have cats put you off making your garden hedgehog friendly.

In some gardens, cats and hedgehogs seem to get along just fine as you can see here.

If fact, it turns out that hedgehogs are quite well able to defend themselves from cats. Or even see them off if they feel they need to.

Take a look at this video of a hedgehog seeing off cat who\s attempting to eat his food.

It’s surprising to see the cats scared off by the much smaller hedgehog, especially when cats are a natural predator. But the clearly find the hedgehogs intimidating.

Will Hedgehogs Give Fleas to My Cat?

Hedgehogs have a justified reputation for being flea-ridden. A hedgehog can play host to several hundred fleas with no ill effects to his own health.

So for years, pet owners have worried about their fur-babies catching fleas from hedgehogs.

It turns out there is no need to worry. Though hedgehogs often come equipped with a small army of fleas, these are hedgehog fleas, they are “host specific ” and cannot live on any other animal.

So whilst your cat may well catch fleas whilst he is out and about, they won’t be hedgehog fleas.

Besides specialist hedgehog food, cat food is one of the best things you can feed to hedgehogs.

If you want to be sure that the food you leave out is being eaten by hedgehogs, and not cats or other animals, the best thing to do is set up a hedgehog feeding station.

Whether you make or buy. a feeding station, the design should allow the hedgehog in but make access difficult for bigger creatures like cats.

Will My Cat Escape Through a Hedgehog Highway?

If you are making a hedgehog-friendly garden, you will need to add a highway, or gap in the fence, to allow hedgehogs to come and go.

Hedgehogs need to roam 1 – 2 miles every night to gather the food they need. So unless you have a country estate, your garden alone will not be big enough for them. They need to be able to roam freely.

The ideal size for a hedgehog highway hole is around 5 inches square. Many cats will be able to get through a hole this size.

If you have an outdoor cat, it’s probably leaving your garden by all sorts of secret routes anyway, and one more isn’t anything to worry about.

If on the other hand, your cat is more of an indoor sort, only allowed out for supervised exercise, there are a couple to things you can do to make the hedgehog highway cat-proof.

You could make the highway into more of a tunnel, using a bit of pipe for example. Cats will hesitate before entering a small tunnel if they’re not sure what’s on the other side.

You could make a baffle, but placing a couple of bricks about 4 inches in front of the hole. This will still allow access for hedgehogs but will be too tight for most cats.

Or, if you are only letting the cat out for an hour or so in the daytime, just block the hedgehog hole whilst the cat is out and open when she goes in. Hedgehogs are unlikely to be out in the daytime anyway.

What About Cats and Other Garden Wildlife?

Although cats don’t attack hedgehogs, they are a predatory species, and they will attack other garden wildlife.

The Mammal Society estimates that domestic cats in the UK kill 100 million prey animals each year. This includes 27 million birds.

It is not believed that cats are responsible for the decline in bird species. Most of the bird species they attack are reasonably abundant in the UK.

But it’s certainly not pleasant watching cats attack the birds you have worked to attract to your garden.

We have lots of advice on keeping garden birds safe from cats and other dangers on our bird blog.

How About Dogs and Hedgehogs?

An attack from a dog, especially a larger one can certainly cause trauma and sometimes injury for the hedgehog, and may occasionally even be fatal.

The encounter probably isn’t going to be that pleasant for the dog either!

Some dogs (mine included) will just look at hedgehogs from a distance and give them no trouble at all.

But if you find that your dog does go for visiting hogs, the best policy is to keep the two apart.

Hedgehogs are creatures of habit, they tend to turn up at a particular time every night. So you could make sure your dog is in when your hogs are due to visit.

Some people also keep their dog on a lead for its last outing of the night, just to be on the safe side.

Cats and Hedgehogs Can Get Along

So we’ve seen in this article that cats and hedgehogs pose no real threat to one another. Cats rarely attack hedgehogs, and hogs won’t give your cat fleas.

So there is no reason why cat lovers shouldn’t enjoy hedgehogs in the garden.

As a species hedgehogs in the UK are in real trouble. Gardens are becoming a critical habitat for them. And every new bit of hedgehog friendly back yard we can create is a step in the right direction.

And just for general cuteness we’ll leave you with this:

We hope you found this post interesting and useful.

If you have questions and suggestions, we would love to hear them. Leave us a comment below.

1 thought on “Will Cats Attack Hedgehogs?”