Guinea Pig or Hamster? Which is Right for You? Learn the 7 Key Differences 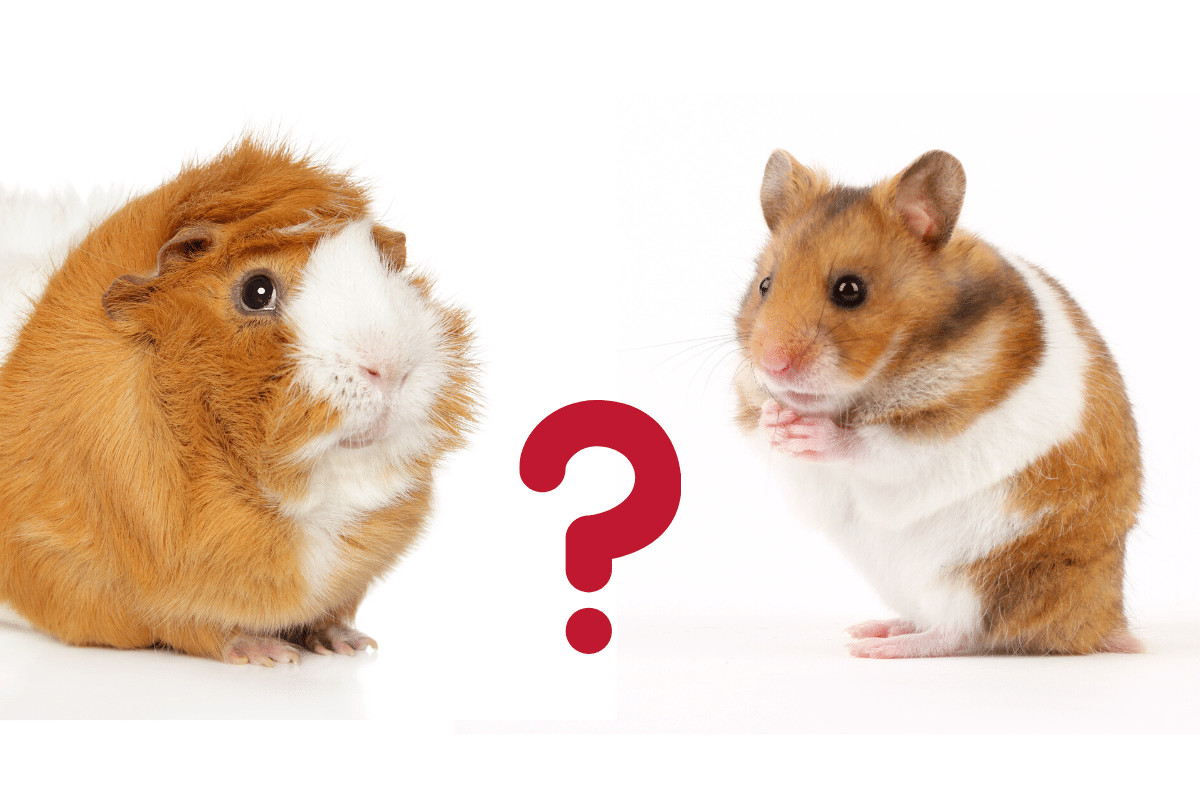 So, you are thinking about getting a pocket pet, and can’t decide between a guinea pig or hamster. We get it. They are both as cute as heck and to the untrained eye, probably very similar. But don’t be fooled. While hamsters and guinea pigs are classified as rodents, it’s like saying a watermelon and an apple are the same because they are both fruits.

In the great hamster vs guinea pigs debate, there are a few significant distinctions between the two, including their size, how long they live and their social habits. But there are other things to consider too.

In this article, we are looking at the most notable differences between hamsters and guinea pigs. And we are also giving you a list of a few of the questions you need to ask yourself before deciding on which one would make the best pet for you.

Carry on reading to find out everything you need to know about hamsters vs guinea pigs.

7 Differences Between a Hamster and a Guinea Pig?

If stats are anything to go by, 1% of people in the UK own hamsters and guinea pigs as pets, so in terms of popularity, we would say they are neck and neck. But there are some distinct differences. Let’s take a look at these in more detail, starting with their size.

Depending on the breed, guinea pigs can be two to four times bigger than hamsters, and weigh anywhere between 1.5 to 2.6 pounds. Hamsters, on the other hand, only weigh around 1 to 10 ounces. Another way of looking at it is a hamster is the size of a strawberry, while a guinea pig is more spud sized (oops, there’s that darn food analogy again).

Although hamsters are more active than guinea pigs, their cage size doesn’t have to be as big. But keep in mind that they do need to live indoors. Guinea pigs, on the other hand, need lots of space where they can play and forage, and while they do well living inside, they are much better suited to an outdoor hutch with a run.

If you decide on a guinea pig as a pet, there are 13 breeds for you to choose from. Although there are as many as 24 varieties of hamsters, only five of these are suitable as pets.

Regardless of the pet you bring home, you must keep its lifespan in mind. While it is never easy losing a furry companion, irrespective of how long they have lived, some animals are around longer than others. Guinea pigs have a lifespan of between 4 and 8 years. In comparison, hamsters have a life expectancy of between 1 and 3 years. It goes without saying a guinea pig means more of a commitment in terms of time and money.

One major difference between hamsters and guinea pigs is how social they are (or aren’t). Hamsters do better on their own, while guinea pigs are friendly and thrive when there are two or more. Something else to consider is that guinea pigs keep the same hours you do. In other words, they are awake during the day and sleep at night. But hamsters are nocturnal, spending their days asleep while being super busy at night.

Guinea pigs are chatter bugs and tend to make a lot of different sounds. Hamsters, although not as noisy, make their presence known in the wee hours of the morning scurrying around their cage or doing a spinning session in their wheel.

Typically, hamsters are far more temperamental than guinea pigs. And because they are smaller and more fragile to handle, they are more likely to nip or bite. If you have very young children in the house, a guinea pig is probably a better option.

Guinea Pig vs Hamster? Questions You Need to Ask Yourself

Guinea pigs might be small, and hamsters even smaller, but both still require a fair amount of care and attention. And yes, even though we’re team GP all the way, sometimes a hamster might be a better option.

Before you bring your cute little creature home, it is worth asking yourself a couple of crucial questions. More importantly, though, is making sure you answer them honestly, so the pet you finally decide on is the best fit for you, your home and your lifestyle.

Is space going to be an issue?

Hamsters are not only smaller than guinea pigs, but they are also content in a small cage. This means if space is limited in your home, a hamster would be a better choice. Remember, hammies are also solitary animals, so it is perfectly okay to only have one. If you do decide to get two or more, they will need to be housed in separate enclosures to stop them from fighting.

While it is okay for cavies to be kept indoors, hutch size is vital as is where it is placed. Unlike hamsters that can spin for hours in a wheel or have a ball in a, um… ball, guinea pigs need plenty of room to roam and forage. And whatever you do, never ever buy a hamster wheel for your piggies. Their bodies aren’t built for it, and they can seriously injure their spines. Oh, and remember, it is a good idea to have two or more guinea pigs together, so a bigger cage is essential.

Are you a commitment phobe?

We mentioned this earlier, and although it is on the more morbid side of things, hamsters have a shorter life expectancy compared to guinea pigs. Hamsters, depending on the breed, can live up to  3 years, while guinea pigs live between 4 to 8 years (and occasionally even up to 10). If commitment scares the bejeezus out of you, a hamster is probably your best bet.

While this might sound like a lame chat-up lame on Love Island, it is definitely something you need to consider in the hamster vs guinea pig debate. If you are a cuddler and want a pet that is going to interact with you, then a guinea pig is ideal. Cavies are less fragile, don’t mind being handled and are more receptive to affection from their humans.

Hammies not so much. Hamsters tend to be more temperamental and skittish around humans. They’re also quick to bite if they feel threatened. As cute as they are, they’re not the best option as pets for smaller children. Having said that, though, the more these pocket pets are handled when they are babies, the happier they will be being picked up and cuddled as adults.

Are you diurnal or nocturnal?

Yes, this is a bit of a strange question to ask, but your lifestyle, and whether you are a day or night person is definitely a deciding factor. Guinea pigs, like us, are diurnal. This means they are awake during the day and go to sleep at night.

Hamsters, however, are nocturnal and prefer being awake when everyone else is asleep. Waking them up to play during the day will more than likely result in a very grumpy hamster and a painful bite on your finger. If you are looking for a pet that offers a ‘return on affection’, then a cavy is the way to go.

How much time do you have to spend with your pet?

When it comes to pets, being able to spend time with them is essential. A hamster, as happy as it is on its own, will still need between 15 and 20 minutes of playtime with their human. Guinea pigs, however, need a lot more interaction, and will let you know (sometimes quite loudly) that they want a bit of TLC from you.

What kind of budget do you have?

When you buy or rehome a guinea pig or hamster, you can expect to spend between £5 and £20, but it’s the day-to-day costs that vary. Guinea pigs need more space and a bigger cage. Then there’s their bedding, and food, which they need a lot of. They also live longer than hamsters, and because it is better to have more than one, the costs quickly add up. Caring for a piggy will set you back about £650 a year.

Hamsters are a more affordable option, especially if budget is a concern. And you don’t have to double up on the costs because, unlike guinea pigs, they are quite happy on their own.

To Sum It All Up…

As you can see, there are loads of reasons to have a guinea pig or hamster as a pet, and almost as many why one is better than the other. At the end of the day, which one you choose will depend on your home environment, your personal preference as well as the time and money you have available.

All pets, no matter how small, need to be looked after and cared for. This includes food, bedding, cages, toys, treats and visits to the vet. It also takes time to clean their cages and give them the attention they need. And you have to spend quality time with them.

Team Piggy or Team Hammie? Which one is it going to be? Of course, if you really can’t decide, you could always get both. Just as long as you have the space and keep them in separate enclosures, you will all be one big happy family!

We would love to hear your opinion on this. Are you a guinea pig owner or a hamster parent? Which one do you prefer and why? Your experience and feedback will most definitely be appreciated by our readers.

And if you’d like to read more about guinea pigs check our our guinea pig library here.

1 thought on “Guinea Pig or Hamster? Which is Right for You? Learn the 7 Key Differences”