How To Stop Pigeons Eating Your Bird Food 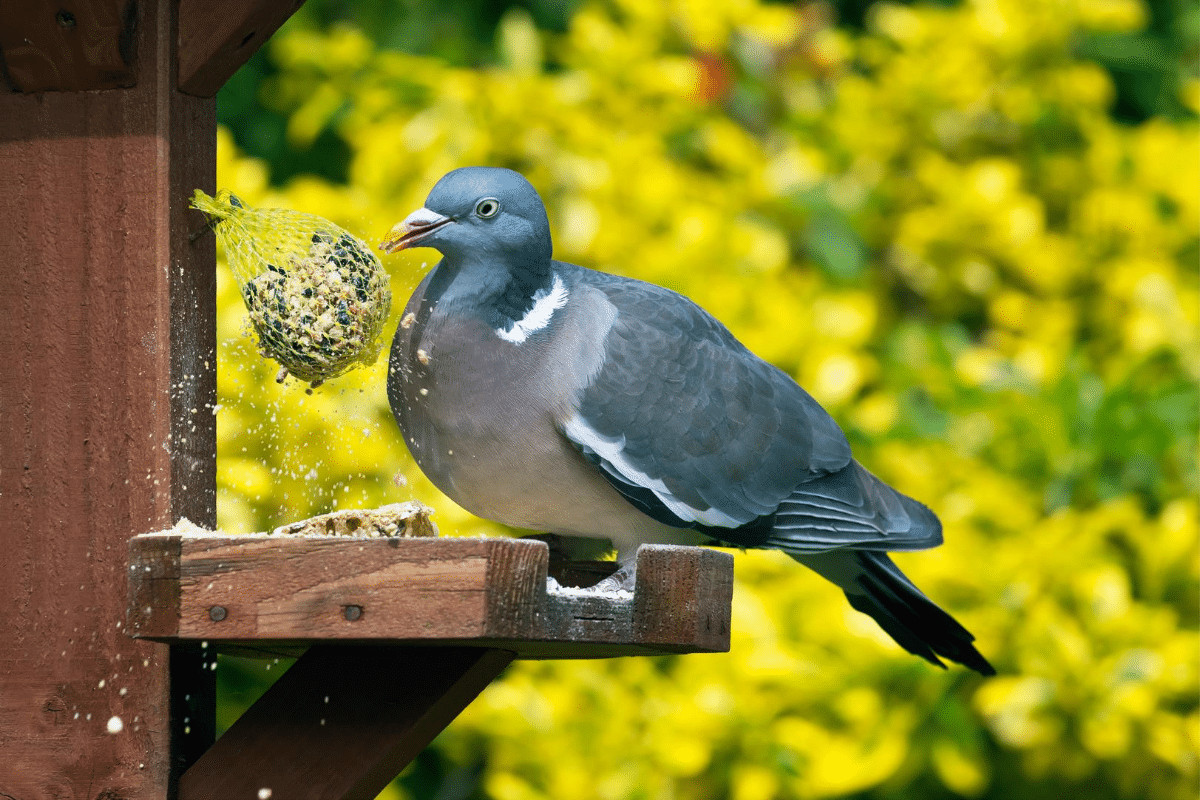 Pigeons are birds, right? So if we want to feed garden birds shouldn’t we be happy to feed pigeons too? Hmm, well maybe, up to a point. But if you’ve ever become popular with your local pigeon population, you will know that there comes a moment when you just think “Enough Now!” If you’ve reached that point, then read on.

How To Stop Pigeons Eating all Your Bird Food.

So Why Are Pigeons a Problem?

Pigeons are birds, wildlife, part of nature. So why do we see them as a problem?

So as you can see, there are lots of good reasons why you might not want pigeons around.

Let’s look at how to make them less welcome.

Pigeons like to feed on the ground. They need a horizontal surface to land on and cannot hang on vertical or angled surfaces to feed. This should give us some clues on what sort of feeders will be unattractive to pigeons.

Straight-sided, hanging feeders will be most difficult for pigeons to feed directly from if they have small perches, so much, the better.

BUT crafty pigeons will try to tip these and spill the seed on to the ground where they will happily hoover it up.

You can buy pigeon proof feeders, which are surrounded by cages too small to allow access for pigeons, but wide enough to let little birds feed.

BUT many people have found that the wire cage on the outside of these just makes it easier for the pigeons to tip them and spill the seed onto the ground.

Sprung bird feeders, where anything heavier than a small bird causes the feeding holes to close, offer a practical option.

So do domed and window mounted feeders like this. The holes are just too small for a pigeon to squeeze through.

Food On The Ground

You may want to keep your hanging feeders for the blue tits and other small birds that love them. You may also want to offer food on the ground for blackbirds and others who prefer to feed there.

But how to keep the pigeons off it?

Pretty simple really. You need a cage that will let seed and small birds in, but keep pigeons out.

You could use an upturned hanging basket, or you could buy one.

The main things to consider are:

The other strategy that works quite well for ground feeders is to throw the feed into your borders or dense shrubs. Though the pigeons will have a go at getting these they are much less agile than the smaller birds, so smaller birds will tend to get more of the food.

Even Amazon doesn’t offer a pigeon-proof bird table. But there are several DIY solutions and pigeon deter ants you could try.

Would it surprise you to know that pigeons love junk food? Probably not. Pigeons like sunflower seeds with the husks on, corn, millet – all the things that are put in cheaper seed mixes to bulk it out.

They are not so keen on:

So the more you can focus on these foods, and the best quality seed mix you can buy, the less interested your pigeons will be.

If You Can’t Beat Them, Feed Them

We are a soft touch in our household. And I reckon the pigeons know it. So we do feed them. But we have a cunning plan.

We have a cheap seed mix and a cheap loaf of bread. We throw some of this on the ground in the front garden. The pigeons descend. Then we scarper around the back and put out the good stuff for our other garden birds.

It works reasonably well. The small birds get a look in before the pigeons arrive. And we don’t spend much money on pigeon food.

If you can’t get rid of the pigeons, either because there are just too many in your area, or because like us, you are a soft touch, then offering some cheap food well away from your main feeding stations is a good compromise.

Pigeons don’t spread disease any more than any other birds, and they don’t attack other birds. But they can monopolise your feeding station. This means smaller birds may be scared off, or not get a chance to take the food they need.

You can make your garden less pigeon friendly by choosing the right feeders and food. Or give your smaller birds a chance by feeding pigeons the junk food they prefer in a different part of the garden.

Pigeons are far too numerous for us to hope to get rid of them entirely from our gardens. But by following a few simple steps, you can give your other birds a fighting chance at the feeders, and save yourself some money too.

We hope you enjoyed this article and found it useful. If you have questions, or your ideas about how to keep pigeons off your bird feeders we would love to hear them. Leave us a comment below.

And to read more on wildlife and garden birds take a look at our bird blog here.

1 thought on “How To Stop Pigeons Eating Your Bird Food”