Are Your Rabbits Protected from Rabbit Haemorrhagic Disease?

Thousands of Rabbits Wiped Out By Deadly Disease in the UK 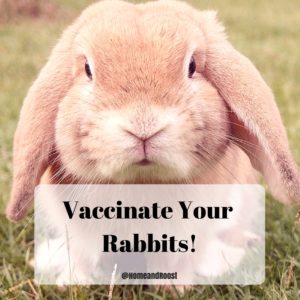 The first reported case of Rabbit Haemorrhagic Disease in the UK was back in 2014. The disease has caused thousands of deaths; 1.3 million pet rabbits are now at risk, along with 37 million wild rabbits. The disease has claimed thousands of lives this year and experts warn that it may become more deadly than the myxomatosis outbreak that killed 99% of the UK’s rabbits in the 1950’s.

The disease strikes fast and the symptoms are easily missed. Hazel Elliot from the British Rabbit Council said the disease has already killed approximately 4,000 rabbits. Owners notice their rabbit is stretched out in a sleeping position with no visible reason for the death. Within one or two days they will find one or more of their rabbits also dead from the disease. The symptoms to watch out for include lethargy, loss of appetite, spasms and fever.

The disease is easily spread between rabbits and is carried by rats, mice, birds and insects.  The current advice available recommends washing out any rabbit hutches, runs and anything else that has been in contact with an infected animal.

Get Your Rabbits Vaccinated Now

There is a vaccine available that will protect pet rabbits but it isn’t made in the UK. Vets can order it for you but many pet owners have been waiting more than 6 months for their vaccination to arrive. The vaccination costs around £30. Visit or phone your vet and place your order to protect your pet as quickly as possible.