Why Do Cats Make Weird Noises At Night? 7 Feline Sounds and What the Mean 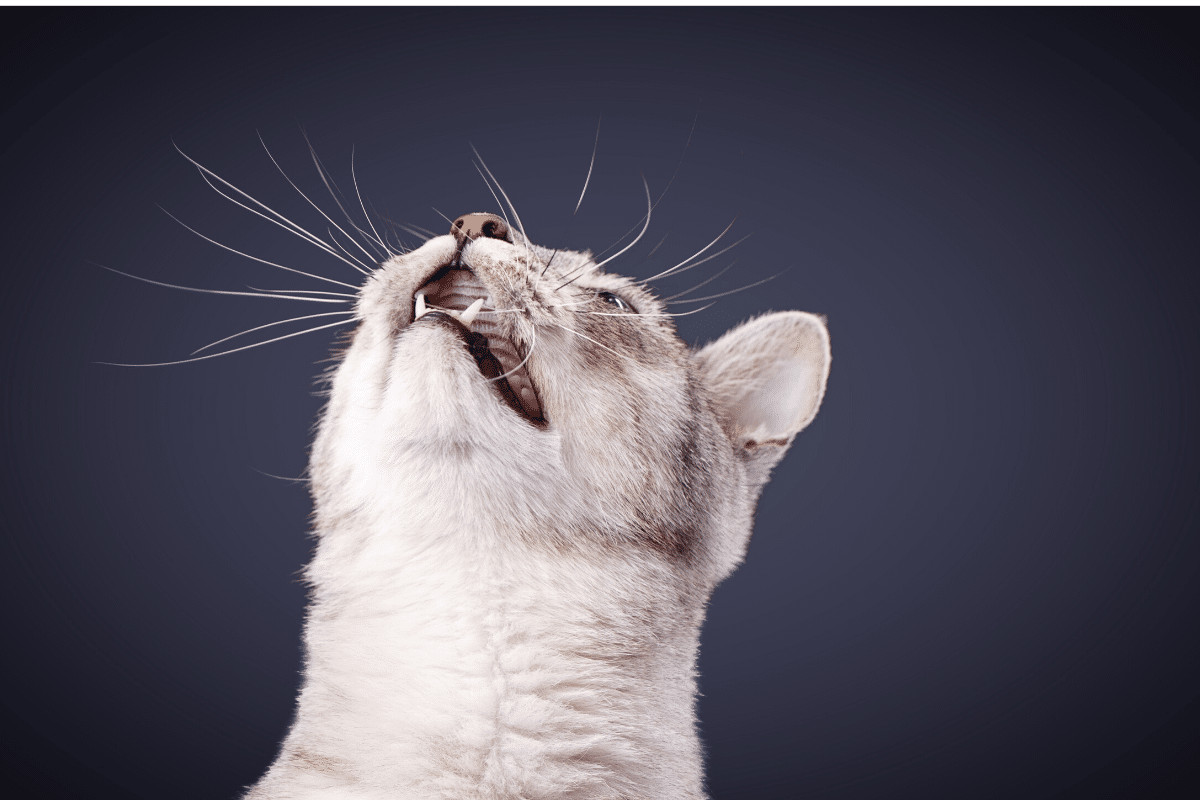 How fluent in feline are you? We bet if you turned to the person next to you now and asked them what noise a cat makes, the answer would be ‘meow’. Although this is partly true, they also make a whole lot of other sounds. While the more common noises like purring and meowing are heard during the day, cats have an entirely new repertoire at night. So just why do cats make weird noises at night?

So why are cats so vocal in the wee hours of the mornings, and what do the different noises mean?

Carry on reading to find out what your cat is trying to tell when it chirps, purr, chatters and hisses. And don’t miss the must-see videos, especially the one with the little kitten bleating like a goat!

Have you ever been woken up in the middle of the night by a terrifying yowl? We certainly have, which is why we decided to find out more about the way cats communicate, and what the various noises mean.

As we mentioned before, cats can be quite chatty during the day. They’ll purr and meow when they’re content, chirp when excited and hiss when they’re angry. But it’s at night that they’re particularly loud,  with very little regard for interrupting your beauty sleep.

So, why is it that cats are rambunctious at night? Let’s take a look at the possible reasons.

Cats are crepuscular, which means they’re especially active between dusk and dawn. You see, cats are programmed to be more active at night. In the wild, cats’ prey, including snakes, rats, mice and other small animals are usually up and about this time, making them easier to hunt. It’s how feral cats have survived for millions of years. In other words, your cat is simply doing what comes naturally.

If your indoor female cat suddenly starts meowing at night, it could be that she’s in heat and is desperate to find a mate. It’s a good idea to have your cat spayed as early as possible to stop this nighttime activity. Spaying will also prevent unwanted pregnancies and reduce the risks of your cat getting certain types of cancers and Pyometra.

Cognitive Dysfunction Syndrome or CDS is common in older cats and affects their cognitive abilities. The disease is not always easy to diagnose because some of the symptoms can often be put down to ‘cats just being cats’. Confusion, disorientation, sudden changes in sleep patterns and nighttime yowling are just a few signs your senior cat might be suffering from dementia or CDS. It is worth mentioning that although it is an age-related illness, cats under 10 years of age can also be affected by this cognitive disorder.

Stressed out cats are more prone to making weird noises at night. As you know, cats are prone to stress, and it doesn’t take a lot to throw them off-kilter. Some of the more common stressors include:

A cat meowing close to breakfast or dinner time isn’t unusual. And in all the day-to-day goings-on, it probably doesn’t sound that loud. But when a cat cries at 4 am to let you know it’s hungry, it sounds like a foghorn. Hunger or thirst could very well be the reason why your cat is making weird noises. Before going to bed, make sure there is plenty of water, and maybe leave a little food out too.

Understanding What Your Cat Is Saying

Have you got a chatty-catty on your hands? Cats have an extensive ‘vocatulary’ and their chirps, purrs, yowls and hisses are its way of communicating with you. Knowing what they are trying to tell you will give you a better understanding of its behaviour.

Carry on reading to find out what the most common night (and day) cat noises mean.

Did you know that cats very rarely communicate with other cats by meowing? This characteristic sound is your cat’s way of telling it needs something. It could be food, water, to be let in or out, or just some TLC. It could also be a sign of illness, injury or loneliness.

There’s nothing more calming than the gentle purring of a cat. This rumbling sound is a sign that all is well in your cat’s world, but it can also mean agitation. A cat’s posture will let you know which one it is. Laidback and relaxed in your lap means contentment, while pulled back ears and a tense body is a sign that something is up and your cat’s feeling a little stressed.

Chattering often happens when a cat has spotted something it would like to get its paws on, but can’t. Think of it as anticipation, excitement and disappointment all rolled into one. Chattering, squeaking and chirping can best be translated as ‘please let me out to look at the bird/squirrel. I promise I won’t touch! Please, please, pleeeasseee!’

Yowling is your cat’s way of letting you, and other cats know something’s up. The noise is a combination of a yelp and a howl and is indicative of a problem. Reasons for constant yowling include:

A cat’s hissing is unmistakable. Like something out of a horror movie, it’s often accompanied with a twitching tail, arched back and puffed up fur. Our advice is to steer clear and get rid of whatever’s causing the demonic-like behaviour as quickly as possible.

Growling and snarling often go hand in hand with hissing. You don’t need to be fluent in cat-speak to know it’s a sign of anger, irritation or fear. Unless your cat is in obvious danger, the best thing to do is to leave it alone and remove the threat.

Have you ever heard a cat bleat? There are a few explanations as to why kittens and cats do this, but to be completely honest, we don’t really care. All we know is that it’s one of the cutest things you’ll ever see. Take a look at this video, and yes, you’re welcome.

Knowing the different sounds your cat makes, and when it’s making them will give you a better understanding of its health and state of mind. Not only will you be able to identify potentially serious illnesses or injuries, but you’ll also know when you need to step in and help, step back and let your cat be, or grab a phone and record the hilarity.

We’d love to hear about the sounds your cat makes. Let us know in the comments below, so we can share them with our readers.

1 thought on “Why Do Cats Make Weird Noises At Night? 7 Feline Sounds and What the Mean”