The History of Hedgehogs | 15 Million Years and Counting! 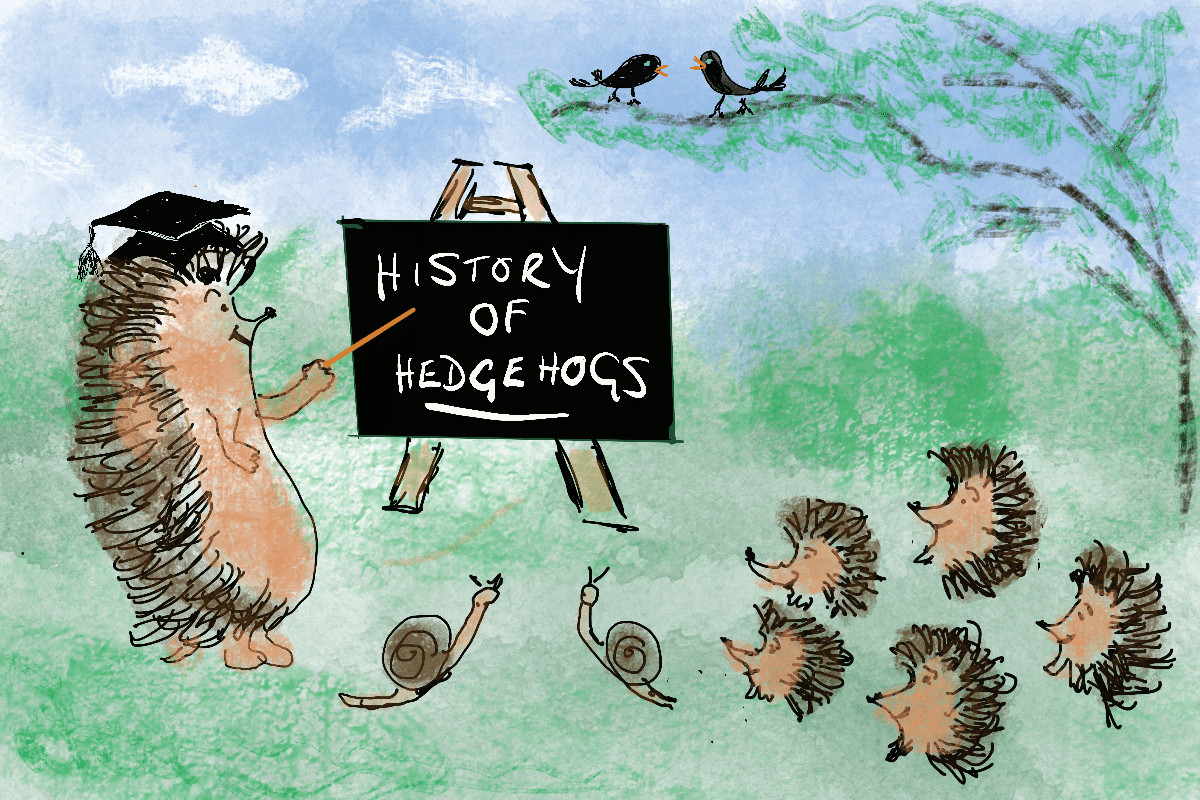 If you had trouble with history lessons in school just be thankful you’re not a hedgehog. Whilst the first Homo Sapiens – modern humans – walked the earth around 200,000 years ago, hedgehogs have been around for over 15 million years. Imagine having to learn all that history for a GCSE! It’s a long and fascinating history and in this post, we are going to take a look at the highlights from the history ofhedgehog.

The History of Hedgehogs

Hedgehogs first evolved over 15 million years ago. They are one of the oldest species of mammal on the planet.

Many of the other mammals that walked the earth when hedgehogs first arrived are long gone. Things like Mastodons and sabre-toothed tigers died out millions of years ago. Even species like the camel, which are also ancient creatures, have evolved massively over the years.

Not so the hedgehog.

Scientists believe that the modern hedgehog is very similar to the hog that existed 15 million years ago.

The skeleton, teeth and skull are all pretty ancient in appearance. If you look at a hedgehog skeleton you could be forgiven for thinking you were looking at the skeleton of a mini-dinosaur.

There have been some evolutions. There was a Mediterranean hedgehog, which was the size of an actual pig. This variation didn’t seem to work though, and quickly died out.

So why hasn’t the hedgehog evolved?

Well, it was just very well designed in the first place. Spines are a great protection against predators. Hibernation means hogs don’t starve in the winter. They can eat a huge range of things and thrive in all sorts of environments.

So, for 15 million years, hedgehogs have done very well for themselves, without the need to change.

Most people think that hedgehogs and other spiny creatures like porcupines and spiny anteaters are related.

In fact this isn’t the case. Hedgehogs are part of a very small group of creatures – the insectivores. Their closest relatives are shrews.

Porcupines and anteaters on the other hand are rodents, like rats and guinea pigs.

The Latin name for hedgehog is “Erinaceus” and this is the scientific species name for all the world hedgehogs. The Latin word also means “Christ’s Thorn” or “Jerusalem Thorn”. Our own European Hedgehog is Erinaceus Europaeus.

Other hedgehog names also focus on the thorny nature. “Urchin” – like a sea urchin, was popular slang for hogs in Britain, and the German and Dutch names are related to this.

Our own word “hedgehog” ignores the prickles and instead names them for their snuffling noises and habit of living under hedges.

Perhaps the least flattering name for hedgehogs is the Welsh “grainneog” which translates as “horrible one”!

Hedgehogs are mentioned in the bible – maybe.

The Hebrew word “kippod” comes up in the bible and has been translated as hedgehog by some scholars. Others, though, think the word means “Bittern”, which as you will know, is a water bird. Very different.

So it’s difficult to know whether the hedgehog can claim to be biblical. But they certainly would have existed in the bible lands at that time.

Shakespeare mentions hedgehogs in several of his plays.

And then of course we have probably the best loved hedgehog of all time Mrs Tiggywinkle. She is said to be based on one of Beatrix Potter’s own pet hedgehogs.

Alice in Wonderland has great trouble using them as balls in a game of croquet.

Though not exactly literature the hedgehog is still alive and well in popular culture in the form of Sonic. Sonic the Hedgehog was a hit in the 90’s and is having a revival now. Shame he looks more like a squirrel!

As such a popular and (until recently) common, mammal it’s no surprise that there are quite a few folklore myths around hedgehogs.

It used to be said that hedgehogs would spike apples and other fruit with their spines and carry it off. There are even pictures of them doing this in medieval tapestries.

It’s a nice thought, but probably not true. First of all, given other choices, hedgehogs aren’t that interested in eating apples. And if they did, why would they bother to carry them? Why not just eat them where they found them?

And finally, how would they get them onto their spines? When a hedgehog is out and about, the spines lie flat, so even an apple falling from the tree onto a hedgehog would probably bounce off.

Legend has it that hedgehogs will steal the milk from the udders of cows.

Sounds unlikely – but there may be a little more truth in this one.

Milk is bad for hedgehogs but they do like to drink it.

It’s unlikely that a hedgehog could reach the udder of a standing cow. And even if he did the cow probably wouldn’t be best pleased to find a hedgehog hanging on to her with teeth and claws.

But when cows are due to be milked they will often leak milk onto the ground around them. It’s entirely possible that a passing hedgehog might be attracted by the smell and stop by for a quick drink.

Not Poisoned by Snake Bites?

Hmm, well there is only one poisonous snake in the UK, the adder. A bite from an adder can kill mice, voles and even rats.

An adder couldn’t bite a hedgehog through its spines, but if it managed to get at one of the hedgehog’s less spikey bits it certainly might deliver a nasty nip.

But it’s far more likely that, at the first sign of a strike, the hedgehog would curl into a ball round the snake. If you’ve ever been unlucky enough to have a hedgehog curl up around your finger you will know that this probably means the end of the snake. And then the snake could well become the hedgehogs dinner.

Scientific studies have shown that hedgehogs are more resistant to venom than other small mammals, though not immune. And when hibernating their resistance to all sorts of poisons is huge.

Though a hibernating hedgehog wouldn’t be bitten by a snake. Because the snake would be hibernating too!

Here comes the grisly bit – please look away if you are squeamish!

Hedgehogs have been very useful to man over the centuries, and continue to be today.

Like many other animals hedgehogs were popular in medieval medicine.

A tea made from an infusion of dried hedgehog skin and pepper was thought to be good for Colic.

Hedgehog ashes were the best thing for boils, and powdered hedgehog skin was a sure remedy for hair loss.

Hedgehogs were thought to cure leprosy, which is nonsense. But strangely they do  catch leprosy easily and develop the disease in a very similar way to humans. So more recently they’ve proved very useful in research into the disease.

In medieval times roasted hedgehog with wild duck sauce was a delicacy served to kings and nobility.

Hedgehogs have traditionally been eaten by gypsies. Wrapped in clay, spines and all, and roasted in the embers of a fire.

This practice was common until at least the Second World War, when there are reports of people being fined for eating hedgehogs without the right ration cards.

Much more recently boxer Tyson Fury has sparked fury (!) by claiming to eat hedgehog, marinated in honey and roasted in the oven. This may or may not be illegal, but it’s roundly condemned by the British Hedgehog Preservation Society and animal lovers across the country.

The spines on a live hedgehog are quite flexible and almost soft, until it curls up. But a dried hedgehog skin is another matter. The spines stand up straight and become very hard and sharp.

Before the industrial revolution this made dried hedgehog skins great carding combs. They were used to comb out the fibres in wool so that it could be spun and made into yarn for knitting or weaving.

Dried hedgehog skins with their mass of sharp spikes also made an effective burglar deterrent.

They were fixed to the top of walls and gates around orchards to protect the crops.

Things have been pretty grim for hedgehogs over the past 70 years. Road traffic, intensive farming, pesticides and development have had a devastating effect on their numbers.

But maybe things are looking up?

In 2016 the hedgehog was officially voted Britain’s favourite mammal by a huge majority.

Hogs are now also officially “cute” appearing on t-shirts, mugs, cushion covers. Even Christmas cards, though you won’t see any out and about at Christmas.

Though numbers are still declining in the countryside hedgehogs are doing surprisingly well in our towns and cities. And although feeding the hedgehogs isn’t yet as popular as feeding the birds, it’s getting there.

And perhaps most important, hedgehogs are becoming hugely interesting to science.

Scientists want to know more about the mechanism of hibernation and how it might be applied to humans. They believe that understanding hibernation could have all sorts of benefits, from recovering from injuries or operations, to space travel.

Conclusion: An Interesting Past and a Hopeful Future

Hedgehogs have been around for much longer than we have.

Although they have had a very rough few years they’ve now won our interest and our affection. And this could be the key to the hedgehogs survival.

For more fascinating facts about hedgehogs take a look at Pat Morris’ excellent book Hedgehogs, which we used in our research for this article.

Or get involved with hedgehog preservation at Hedgehog Street.

We hope you have enjoyed this quick trip though the fascinating history of the hedgehog.

If you have questions or suggestions we would love to hear from you. Leave us a comment below.

1 thought on “The History of Hedgehogs | 15 Million Years and Counting!”